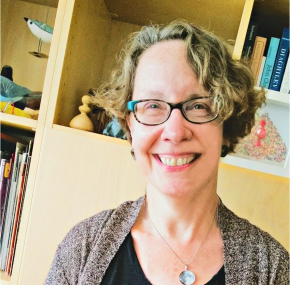 The CBC asked West Margin Press author Sharon Mentyka to tell us about her book Chasing at the Surface, a middle-grade, coming-of-age story about courage and the healing power of nature. This is the story of a young girl who struggles with feelings of loss after her mother unexpectedly leaves home — just as a pod of nineteen orca whales becomes trapped in the enclosed inlet near her Northwest home.

CBC: What inspired you to write Chasing at the Surface?

SM: As a writer, I’m often inspired by small kernels of truth—items in newspapers, overheard conversations, little-known historical facts—and although Chasing at the Surface is fiction, it’s based on a true event and the genealogy and science behind the study of killer whales is authentic.

In fall 1997, nineteen Southern Resident Killer Whales, members of the L-25 sub-pod, paid an unexpected and unusual 30-day visit to Dyes Inlet, a small estuary in Puget Sound, near Seattle, Washington. Most experts believe they were following a run of chum salmon or maybe they were just curious, as killer whales can be. Either way, their 30-day visit was unforgettable.

When I read an article reporting on the ten-year anniversary of their visit, I remember thinking that this would be a great setting for a story about family and trust. But because my story isn’t historical fiction, I was able to move beyond a re-telling of the specifics of the actual event, and other themes emerged.

To me, that is the beauty of storytelling. The factual events of the orcas’ visit became the framework for a story that explores loss, courage, faith, and what it means to call a place home.

The book has been recognized for its nature writing with whale scenes so descriptive they really place the reader in the action. What can you share from the research you did for your book?

We’re fortunate here in the Pacific Northwest to share the waters of the Salish Sea with wild orcas and learning about these creatures was very special. Much of what I learned from visiting Dyes Inlet and speaking to whale researchers, journalists, and community residents became part of this book. Killer whales (Orcinus orca) are found in every ocean on the planet, but the Southern Resident Killer Whales (J, K, and L pods) are some of the most well-known. They still frequent the inland waterways of Washington State and the boundary waters between the United States and Canada every spring through fall and hold particular cultural significance for the region’s indigenous peoples. In the winter months, they’ve been spotted as far south as central California.

The Southern Residents are amazing creatures. They’re extremely social animals that live and hunt collaboratively, travel in large family groups, and communicate in multiple dialects distinct to each pod. But their survival is becoming increasingly precarious. Their numbers declined sharply in the late 1960s as a result of live captures for aquarium display (including the infamous Penn Cove capture in August 1970 described in my book). In 2005, the Southern Residents were placed on the Endangered Species List and today their current numbers have dwindled to just seventy-two individuals.

Do you think this book could open middle-grade readers’ eyes to wildlife conservation and marine biology?

What’s great about writing for middle-grade readers is that this is the time when they are figuring out the world, their families, and themselves. They’ve so open to new ideas and learning, and books are a great way for them to explore all the possibilities for the future. So if my story sparks interest in students exploring marine biology or habitat conservation that would make me very happy.

Orcas are considered apex predators, at the top of the food chain. This means that everything in their environment affects their survival and their health is directly linked to the health of our ecosystems. The three biggest threats the Southern Residents face are lack of prey (salmon), exposure to toxins in the water, and the impacts of vessel noise. Their diet is Chinook salmon, that’s it. So maintaining plentiful salmon runs has a huge impact on helping these amazing mammals. If young readers are interested in learning more about orcas, the Center for Whale Research in Friday Harbor, WA, and Orca Network are both good places to start. My book also lists organizations where kids and their parents can learn more about ways to help.

To learn more about killer whales and their habitat, kids can download the author’s Student Activity Guide.

Sharon is a writer, designer, and teacher with an MFA from the Whidbey Writers Workshop. Chasing at the Surface is her debut novel for middle-grade readers. She is also the author of two picture books: Think Smart, Be Fearless: A Biography of Bill Gates and The Heart of the Storm: A Biography of Sue Bird.

Chasing at the Surface is featured in the latest CBC Showcase: Love Makes the World Go Round.

Awards for Chasing at the Surface

Check out more Guest Q&As with our community!