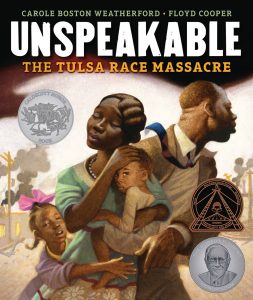 Unspeakable traced the history of African Americans in Tulsa’s Greenwood district and the 1921 devastation.

In their book, Unspeakable, author Carole Boston Weatherford and illustrator Floyd Cooper traced the history of African Americans in Tulsa’s Greenwood district and chronicled the devastation that occurred in 1921 when a white mob attacked the Black community.

News of what happened was largely suppressed, and no official investigation occurred for seventy-five years. This picture book sensitively introduces young readers to this tragedy and concludes with a call for a better future.

Carole Boston Weatherford said to the CBC recently: “Floyd poured the memories of his grandfather, a survivor of the massacre, into the illustrations for Unspeakable. I believe that this is the book that Floyd was born to create and the legacy that he was meant to leave his hometown and readers around the world.”

Last year, the CBC posted a reading list of several children’s and adult books about the Tulsa Race Massacre.

Published on the 100th anniversary last year, Unspeakable won several major awards and will continue to be essential reading for years to come.