Home > Blog > The Story of the First…

The Story of the First Memorial Day 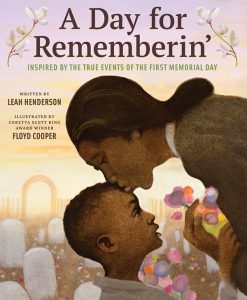 Written by Leah Henderson and illustrated by Floyd Cooper and inspired by true events, A Day for Rememberin’ is the deeply moving story about what is regarded as the first Memorial Day on May 1st, 1865, in Charleston, South Carolina.

Leah Henderson told CBC recently that “A Day for Rememberin’ came about because I wanted to share the little-known history of the first community-led observance of Memorial Day–one of our nation’s most honored holidays–and the role newly emancipated men, women, and children played in its beginnings. I think it is vital, and I’m sure Floyd would’ve agreed, that we must search out and highlight overlooked or ignored moments to help fill out our country’s history, especially for young readers, in the hope that they will be curious about viewpoints and experiences that may be absent in their own history books.”

NEW! Leah Henderson has recorded an exclusive video for the CBC and Every Child a Reader, reading from A Day for Rememberin’.

“Cooper’s mixed-media illustrations beautifully depict the community’s emotions and their actions in creating a memorial. Soft colors gently envelop readers in the story… An enchanting account of the first Memorial Day, this book is recommended for all.” ―SLJ starred review

“The moving story, as seen through the eyes of a newly freed boy watching his father and others work hard in anticipation of memorial festivities, is enhanced beautifully by Cooper’s illustrations.” ―Booklist

“Henderson’s affecting narrative resonates with reverence, and Cooper’s prolific use of muted browns and yellows creates a solemn yet celebratory tone… This worthy title offers another little-known fact about African American contributions that are an imperative part of America’s history and traditions.” ―The Horn Book Magazine