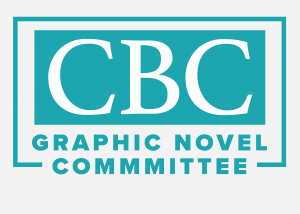 Last month, the CBC Graphic Novel Committee organized a fantastic virtual panel where gripping new Kids/YA Buzz debuts were presented to over a hundred teachers, librarians, and booksellers. The great titles sparked such interesting conversations and joyful book talk that we wanted to share with you the exciting range, power, and fun of these books!

Piece by Piece: The Story of Nisrin’s Hijab by Priya Huq (ABRAMS / Amulet Books) —
In this middle-grade graphic novel, Nisrin will have to rely on faith, friends, and family to help her recover after she is the target of a hate crime.

A Tale as Tall as Jacob: Misadventures with my Brother by Samantha Edwards (Andrews McMeel) —
In this charming and poignant debut graphic novel, a young girl struggles to understand, accept, and support her remarkable little brother as he adapts to life with ADHD. Based on the author’s own childhood and told through funny, beautifully illustrated vignettes, this story of two siblings celebrates empathy and embraces how difference makes every family unique.

Specter Inspectors by Bowen McCurdy and Kaitlyn Musto (BOOM! Studios) —
“This book is everything I wanted to read when I was young; queer characters on adventures, ghosts, romance, and only a handful of demons.”-Bowen McCurdy.

Dusty Dabbert: The Secret Animal Kingdom by Piet Wijn; illus. Thom Roep (Creston Books) —
Dusty stumbles into a hidden world where animals live in harmony, ruled by a wise frog. Dusty travels through the countryside, helping all those he meets with his magical knapsack, which mysteriously contains exactly what he needs for any circumstance. When human intruders try to turn the animals into a circus act, Dusty has to figure out a way to bring back the kingdom’s peace. Humor and lively details bring this fairy tale world to life. The Dutch equivalent of Asterix, these beloved popular graphic novels are available in the U.S. for the first time ever.

Himawari House by Harmony Becker (Macmillan / First Second) —
A young adult graphic novel about three foreign exchange students and the pleasures, and difficulties, of adjusting to living in Japan.

Shark Summer by Ira Marcks (Little Brown BYR) —
When a Hollywood film crew arrives on Martha’s Vineyard with a mechanical shark and a youth film contest boasting a huge cash prize, disgraced pitcher Gayle “Blue Streak” Briar sees a chance to turn a bad season into the best summer ever. After recruiting aspiring cinematographer Elijah Jones and moody director Maddie Grey, Gayle and her crew set out to uncover the truth of the island’s own phantom shark and win the prize money. But these unlikely friends are about to discover what happens when you turn your camera toward the bad things lurking below the surface.

Blackblood: Acolyte by Phu Vuong; illus. Isa Enriquez (little bee books) —
Told in dual perspectives, this fantastical debut graphic novel with the wit of Nimona and the adventure of Amulet is a whirlwind journey involving mages, mercenaries, escape plans, food fights, and more! Centuries ago, magic mysteriously appeared in the kingdom of Allia. At first, the mages who could wield it became servants to the king, using their newfound powers for the betterment of society. However, an evil group of mages called Blackbloods went rogue, siphoning magic from their peers before they were stopped. But after that, the king imprisoned all mages, Blackblood or not.
Years later, mage siblings Kanna and Kita are in hiding, careful to avoid being taken by the King’s Guard. Despite the looming threat of imprisonment, Kita dreams of becoming a powerful mage, while Kanna is content living in the shadows. Kita gets the chance to prove himself when bandits invade their camp, only to realize that he lacks control over his magic when they kidnap Kanna. Now Kita, with the help of a mercenary, Toran, must rescue his sister from the dangerous gang, while Kanna tries to find her own way to escape.
What do the bandits want with Kanna? And will Kita be able to save his sister without getting found out as a mage?

The Adventures of Team Pom: Squid Happens by Isabel Roxas (Flying Eye Books) —
When oddballs Agnes, Roberta and Ruby discover a shared passion for synchronized swimming, the trio become Team Pom. But between snack time, their favorite TV show, and raising pigeons, it can be hard to find time to practice.
This crew of self-proclaimed weirdos are tired of their loser status in the pool. But on their way to gain the respect and free snacks they deserve, they stumble upon a lonely giant squid. Will he be the secret weapon they need for synchronized swimming stardom? Will they be able to outwit the sinister strangers in bowler hats, or will they end up with ink on their faces?
The first in this series and a debut comic book from award-winning Filipino illustrator Isabel Roxas, Squid Happens is a hilarious read that explores friendship, teamwork and what it means to be yourself..

The Sprite and the Gardener by by Rii Abrego and Joe Whitt (Oni Press) —
Long, long ago, sprites were the caretakers of gardens. Every flower was grown by their hand. But when humans appeared and began growing their own gardens, the sprites’ magical talents soon became a thing of the past. When Wisteria, an ambitious, kind-hearted sprite, starts to ask questions about the way things used to be, she’ll begin to unearth her long-lost talent of gardening. But her newly honed skills might not be the welcome surprise she intends them to be. The Sprite and the Gardener, the debut graphic novel by Joe Whitt and Rii Abrego, is bursting with whimsical art and vibrant characters. Join our neighborhood of sprites in this beautiful, gentle fantasy where both gardens and friendships begin to blossom.

Mayor Good Boy by Dave Scheidt; illus. Miranda Harmon (Random House Graphic) —
The votes are in and the new mayor is…A DOG?! This dog will do more than shake paws. Mayor Good Boy is here to help Greenwood become a town filled with kindness, starting with fetching help for the local zoo. With foes around every corner trying to put a stop to Mayor Good Boy’s campaign of fun, are there cheese snacks and belly rubs in his future? Or will the whole town suddenly have a flea problem?

Manu by Kelly Fernández (Graphix) —
Set at a magical school for girls, a funny and heartwarming middle-grade graphic novel adventure about friendship, defying expectations, and finding your place.Manu and her best friend, Josefina, live at a magical school for girls, and Manu is always getting into trouble. The headmistress believes that Manu has the potential to help people with her magic, but Manu would rather have fun than fall in line. One day, a prank goes seriously wrong, and Josefina gets angry and wishes for Manu’s magic to disappear… and it does. Manu uses a dangerous spell to restore it, but it makes her magic too powerful and nearly impossible to control. Great power comes at a cost, and it may be a price that Manu isn’t able to pay!

List compiled by the CBC Graphic Novel Committee. Check out more diverse book lists on our blog and from our Inclusivity Resources.