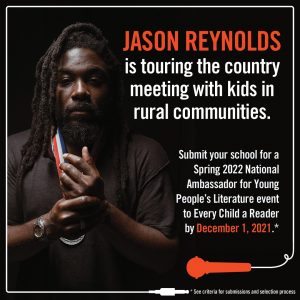 Reynolds to Embark on Tour to Engage Students in Rural Communities

September 20 — The Library of Congress and Every Child a Reader have announced that Jason Reynolds’s term as National Ambassador for Young People’s Literature will be extended to include a third year— for the first time in the history of the program.

Throughout the COVID-19 pandemic, Reynolds connected virtually with thousands of students in rural areas of the country to engage in meaningful discussions. In 2022, Reynolds will meet in person with students in rural communities to continue his work of encouraging young people to share their own narratives. In addition, Reynolds will create an archive of student voices, encouraging students to share their creations via his GRAB THE MIC: Tell Your Story platform.

“I am elated Jason will continue on in his role as the National Ambassador for Young People’s Literature. Jason’s GRAB THE MIC platform has proven that connecting with kids on their level empowers real world growth in reading and writing,” said Librarian of Congress Carla Hayden.

“I am eager to see how Jason will expand his message, encouraging kids to share their own stories in and beyond their own communities.”

“I can’t believe I’m even being afforded the opportunity to extend my ambassadorship a third year,” Reynolds said. “If the goal has changed at all, it’s to be even more present in the lives of the young people I’m serving. More storytelling, more cultural exchange, more creativity, more connection—and this time, in person. Like I said at the start of this, this appointment is not an obligation, but an opportunity to put a spotlight on the collective stories of young America, all while encouraging them to hold those stories, and mold them into whatever they want them to be.”

Reynolds announced and discussed his third term during an interview on NPR’s TED Radio Hour podcast at the Library of Congress National Book Festival. Listen to the episode here.

In November and December 2021, Reynolds will embark on a third virtual tour as National Ambassador for Young People’s Literature. Participating schools were selected from more than 200 proposals received in April 2021, and include:

In support of the tour, the Library purchased paperback copies of Reynolds’s “Look Both Ways: A Tale Told in Ten Blocks” for participating schools, with the generous support of Dollar General Literacy Foundation. Simon & Schuster Children’s Publishing will also continue its support of the National Ambassador program, fostering a love of reading in young students. As a leader in the industry, they are proud to empower their authors and their missions, including Jason Reynolds.

For schools who wish to be considered for Reynolds’s Spring 2022 GRAB THE MIC: Tell Your Story tour, proposals will be accepted from Sept. 24 through Dec. 1. For more information please visit everychildareader.net/ambassador/.
Pivoting his role as Ambassador to the virtual landscape was an immediate act for Reynolds, whose first two virtual Ambassadorship tours connected him with thousands of students across the country—from Gillette, Wyoming to Leland, Mississippi; Pine Ridge, South Dakota to New Hope, Minnesota. In April 2020, in coordination with the Library Reynolds debuted a 30-part video series for kids, “Write. Right. Rite.” The videos offer fun and engaging prompts to express creativity. In March 2020, Reynolds launched “Brain Yoga,” a weekly Instagram Live video series during which he invited young people to join him onscreen to participate in a game that stretched the imagination. Brain YogaTM is now a card game (brainyogagame.com).

Educators are invited to visit the Every Child a Reader website to download Reynolds’s “GRAB THE MIC: Tell Your Story” educator guides. The guides include activities for educators to implement in their physical or virtual classrooms to encourage students to celebrate their personal stories.

About Jason Reynolds
Jason Reynolds is a #1 New York Times bestselling author, a Newbery Award Honoree, a Printz Award Honoree, a two-time National Book Award finalist, a Kirkus Award winner, a Carnegie Medal winner, a two-time Walter Dean Myers Award winner, an NAACP Image Award Winner, and the recipient of multiple Coretta Scott King honors. He’s also the 2020–2022 National Ambassador for Young People’s Literature. His many books include “All American Boys” (co- written with Brendan Kiely), “When I Was the Greatest,” “The Boy in the Black Suit,” “Stamped,” “As Brave as You,” “For Every One,” the Track series (“Ghost,” “Patina,” “Sunny,” and “Lu”), “Look Both Ways,” “Stuntboy, in the Meantime,” and “Long Way Down,” which received a Newbery Honor, a Printz Honor, and a Coretta Scott King Honor. He lives in Washington, DC. You can find his ramblings at JasonWritesBooks.com.

About the Library of Congress
The Library of Congress is the world’s largest library, offering access to the creative record of the United States — and extensive materials from around the world — both on-site and online. It is the main research arm of the U.S. Congress and the home of the U.S. Copyright Office. Explore collections, reference services and other programs and plan a visit at loc.gov; access the official site for U.S. federal legislative information at congress.gov; and register creative works of authorship at copyright.gov.

About Every Child a Reader
Every Child a Reader is a 501(c)(3) literacy charity whose popular national programs include Children’s Book Week, the longest-running literacy initiative in the country, celebrating 102 years in 2021; the Kids’ Book Choice Awards, the only national book awards chosen solely by children and teens; Get Caught Reading, a classroom poster project: and the National Ambassador for Young People’s Literature program, in partnership with the Library of Congress.