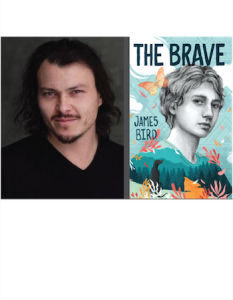 Q&A with James Bird author of The Brave

Will you please introduce yourself to the CBC community?

Hello, my name is James Bird. I am a 2020 debut author who wrote the middle grade novel THE BRAVE. It is an own voices story about an Ojibwe boy named Collin finding out who he really is, not who the world tells him he is. Like my main character, I am also half Ojibwe and like Collin, I also learned differently than the other kids in school.

What does being of Ojibwe descent mean to you?

I love being of Ojibwe descent because it allows me to carry on those teachings through storytelling. It also allows me to be a voice in an industry that isn’t heard from very often. I am very excited to tell Ojibwe stories and introduce my culture to the rest of the world.

What do your family and friends think of your writing?

My family and friends are very proud of me and my writing. When I was young, it would take me an entire year to read a book. It was very hard. My brain would often wander and play silly games with me as I tried to focus, but I learned how to see it as a gift instead of a curse. And now I write books. Pretty cool, huh?

Who did you write The Brave for?

I wrote this book for anyone who grew up being labeled different, weird, or was told they have learning disabilities. I want them to know that we are all unique and so we all learn differently. I was told I was slow, weird, and not able to understand the basics in school, but it wasn’t true. I just saw things differently and learned things in a way the schools never seen before. And instead of conforming and trying to be like everyone else, I want young readers to know that they should embrace their uniqueness. If we were all the same, life would be so boring. So be weird. Be different. Be strange. And most importantly, Be Brave.

In a recent WNDB piece you said the Ojibwe people learned through storytelling. Would you mind elaborating on the value of storytelling in your culture?

The Ojibwe didn’t use written history to teach each new generation. Instead, they used storytelling. And the stories were passed down from grandparent to parent to child to grandchild. It promoted creativity, memory, and the respect to listen to your elders. Everything was taught this way.