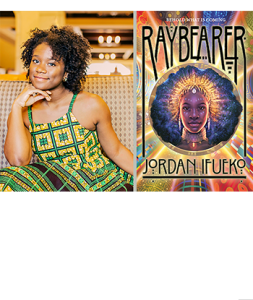 Will you please introduce yourself to the CBC community?

Hi! I’m Jordan Ifueko, author of the YA global fantasy RAYBEARER. I’m a fan of fairy tales with lots of shea butter and 4c curls, and take payment in plates of fried plantain. RAYBEARER is my debut.

Who did you write this book for? Why is it important?

I wrote this book for all the kids who grew up loving fantasy, but knew it didn’t love them back. RAYBEARER draws heavily from West African and other non-Eurocentric cultures–places rarely associated with the fantasy genre of literature, despite all those places having their rich mythologies and folklore. I also wrote this book for people who feel they have secret traumas that will always prevent from fitting in–a conflict I struggled with as an adolescent and know many others can relate to!

Okay first of all thank you for this question, it is Right and Good and Should Be Asked. Second, I think I’d eat them with Chimamanda Ngozi Adichie (because she’s a genius), Michelle Obama (because she’s a superhero), and Lupita Nyong’o (because I would gnaw off my *favorite arm* to even pass beneath her shadow). Plantains must be served with pepper stew, rice, and meat pies, or else the ancestors will be after you.

Tarisai & Kirah maintain a wonderful friendship throughout Raybearer. Can you take us through how you developed these strong female characters?

If you asked me which relationships were most positively formative in my life, it would always be my strong friendships with other girls and women. I never related to the sexist stereotype of girl friendships being “toxic,” because even though I knew unpleasant individuals like everyone else, my female friendships were so profoundly lifegiving that I couldn’t take that trope seriously. I also remember thinking something was wrong with me, because every teen fiction book I read implied that my formative adolescent relationships were supposed to be romantic. It wasn’t the case for me, and honestly, it isn’t the case for many kids. It was easy for me to write Tarisai and Kirah’s friendship from my own experience. While there is also romance in RAYBEARER, the story honors just how much friendships shape us, for good and ill, and I wanted to honor that.

Will you lead us through your world-building process?

At my core, I’m a mythology maker. That means I always tend to start with what the people in a world believe, what they most revere, and what they fear. The original draft of RAYBEARER actually was set 200 years after the current story happens, because I saw the protagonist, Tarisai, through the eyes of a culture that looks back on her as a near-divine legend. I realized after several attempts that hers was the story I actually wanted to tell, and so the empire’s lore–the idea of sacred children, raised to rule an empire spanning continents–grew up around that!