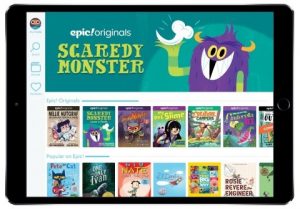 REDWOOD CITY, Calif.–(BUSINESS WIRE)–Epic!, the leading digital reading platform for kids, today unveiled several exclusive original book series, created by some of the biggest names in children’s publishing, including New York Times best-selling author, Tom Angleberger. There are now seven series in the Epic! Originals collection, three of which are available to the public for the first time today.

“Epic! has big plans for the expansion of our Originals program, which will soon include a wide range of exclusive content designed just for kids”

“Epic! has big plans for the expansion of our Originals program, which will soon include a wide range of exclusive content designed just for kids,” said Kevin Donahue, Epic! co-founder. “Two of our latest book series, My Pet Slime and Scaredy Monster, include supplemental video content to encourage connection to characters and stories even after the last page has been turned.”

Created to nurture a love of reading and learning, Epic! empowers kids to choose their own books and explore their interests in a completely safe and responsible environment trusted by parents and teachers. Epic! Originals were designed to complement the existing Epic! library of premium children’s content from the best publishers in the world.

Since the release of the first series in late October of last year, books in the Epic! Originals collection have been read nearly 3 million times by Epic!’s fast-growing audience of over 10 million children, parents and teachers. The first installment of Undersea Mystery Club, “Problem at the Playground,” proved to be a hit among five to seven-year-olds. Kids read the book more than 200,000 times in its debut week alone. If those digital reads were compared to book sales, Undersea Mystery Club would have been a contender for the New York Timesbest-selling children’s book list in its inaugural week.

“Our extensive experience with premium children’s content and millions of young readers has enabled us to create original content that we know will delight kids, teachers, and families,” said Donahue, Epic! co-founder. “Epic’s digital platform allows us to be creatively nimble while providing incredible speed to market. We’re already seeing astounding engagement with our early series and we’re just getting started.”

The Epic! Originals program is led by Eric Wight, an award-winning authority in the field, who has edited, written and illustrated children’s books and comics for two decades. “We are incredibly fortunate to be collaborating with some of the finest creative talent on the planet ― from debut creators to New York Times best-sellers. It’s such a thrill to be able to share their brilliant work with the millions of children reading on Epic!,” said Wight.

The current list of Epic! Originals include the following book series, with many more expected before the end of the year:

Epic!’s award-winning subscription service, which is free to teachers, provides unlimited access to an expansive content library offering 35,000 books, audio books and learning videos from 250 top publishers for $7.99 per month. Kids have read more than 500 million books on the platform with 300 million read last year alone. Epic! has secured more than $50 million in funding with the most recent round of $30 million led by Evolution Media, the global tech, media & entertainment investment company, investing in partnership with TPG and Creative Artists Agency.

Epic! is the leading digital reading platform for kids, created to nurture a love of reading and learning in children everywhere. Epic!’s award-winning subscription service includes unlimited access to the world’s best digital library for kids 12 and under, encouraging kids to independently explore their interests and develop their passions in a completely safe and engaging environment. Kids can freely browse fiction and non-fiction titles, learning videos and teacher-created quizzes and reading lists. Epic!’s library holds more than 35,000 books, read-to-me books, audiobooks and videos from 250 leading publishers such as HarperCollins, Macmillan, Sesame Workshop, National Geographic Kids, Smithsonian Enterprises. Founded in 2014, Epic! now reaches more than 10 million kids. Free to educators, teachers in 91 percent of U.S. elementary schools have signed up to use Epic!. To learn more about Epic!, visit www.getepic.com, or follow Epic! on Facebook and Twitter.