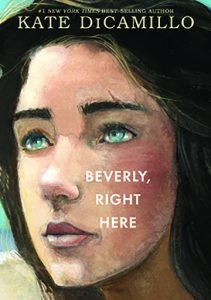 The journey with the Three Rancheros began in 2016, when Raymie Nightingale was published to overwhelming critical acclaim, debuting as a #1 New York Times bestseller. The deeply moving book about a summer of discovery and friendship went on to be a finalist for the National Book Award for Young People’s Literature. Louisiana’s Way Home followed in 2018, also an instant #1 bestseller that garnered seven starred reviews, national media attention, and many best book of the year honors. Now in a touching, funny, and fearless conclusion to her sequence of novels about the beloved characters, Kate DiCamillo tells the story of a character who will break your heart and put it back together again.

Reflecting on the connection among the books, DiCamillo says, “Raymie Nightingale is about the saving grace of friendship. Louisiana’s Way Home is about deciding who you are. And Beverly, Right Here is about acting on that knowledge of who you are. They are all stories of becoming, I think.”

Candlewick Press plans a global laydown on September 24, 2019, supported by an extensive marketing campaign and national author tour to support the new release.

About the book: Beverly Tapinski has run away from home plenty of times, but that was when she was just a kid. By now, she figures, it’s not running away, it’s leaving. Determined to make it on her own, Beverly finds a job and a place to live. She tries to forget about her dog, Buddy, now buried underneath the orange trees back home; her friend Raymie, whom she left without a word; and her mom, Rhonda, who has never cared about anyone but herself. Beverly doesn’t want to depend on anyone, and she definitely doesn’t want anyone to depend on her. But despite her best efforts, she can’t help forming connections with the people around her — and gradually, she learns to see herself through their eyes.

Candlewick Press is an independent publisher based in Somerville, Massachusetts. For more than twenty-five years, Candlewick has published outstanding children’s books for readers of all ages, including books by award-winning authors and illustrators such as the National Ambassador for Young People’s Literature emerita Kate DiCamillo, M. T. Anderson, Meg Medina, Jon Klassen, and Laura Amy Schlitz; the widely acclaimed Judy Moody, Mercy Watson, and ’Ology series; and favorites such as Guess How Much I Love You, Maisy, and Where’s Waldo? by Martin Handford. Candlewick is part of the Walker Books Group, together with Walker Books U.K. in London and Walker Books Australia. The Walker Books Group has a unique ownership structure that includes its employees worldwide. Visit Candlewick online at www.candlewick.com.