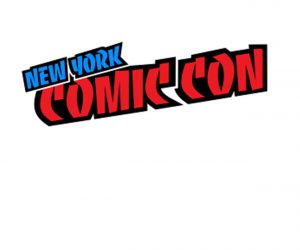 Although the show floor was large, luckily most CBC member publishers’ booths were close to each other. Sales were strong and by Sunday, many member publishers were sold out, or down to their last copy. It was also wonderful to meeting colleagues face to face, after we collaborated over email.

The Harvey Awards were a delight. Organized by Nellie Kurtzman (HarperCollins, daughter of the award’s namesake Harvey Kurtzman) and hosted by Calvin Reid (Publishers Weekly), many CBC members had their outstanding graphic novels recognized. In the Children’s and Young Adult category, the presenter Liniers (Goodbye, Planet) pointed out that all finalists were created by females, before announcing a tie between The Prince and The Dressmaker, Jen Wang (First Second) and The Tea Dragon Society by Katie O’Neill (Oni Press).

Until next year, New York Comic-Con!