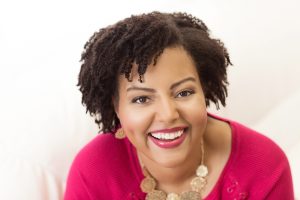 What are your memories of the Tooth Fairy?

As a kid, I was the biggest Tooth Fairy fan girl. When I was around seven, I lost a tooth and wrote her a letter, letting her know she could visit me anytime and play in my dollhouse. And, the next day, I found a trail of glitter all over my bedroom and in my dollhouse! The Tooth Fairy (a.k.a. Mom) had made losing a tooth really fun, and made me believe in magic. I even believed the glitter she left was real fairy dust and ate some, hoping it would give me the Tooth Fairy’s magic powers! I wouldn’t recommend doing that, though. Tooth fairy magic is only for tooth fairies!

What were your favorite picture books as a child?

Harold and the Purple Crayon, by Crockett Johnson, and Jumanji, by Chris Van Allsburg. I loved Harold and the Purple Crayon, because I loved to draw just like Harold. Everything he imagined came to life when he drew it, and I wanted that magic power too.  I even drew on my bedroom walls with a purple crayon to be like him, but that wasn’t such a good idea. Lol! Jumanji was amazing because every time I read it, I felt like I was transported to an exotic jungle. Van Allsburg really captured the magic, excitement, and suspense of playing an enchanted board game through his fantastic artwork. Harold and the Purple Crayon and Jumanji focused on the things that made childhood special to me: imagination and magic. And, they inspired me to write my own magical story, How to Trick the Tooth Fairy.

What were your goals in writing How to Trick the Tooth Fairy? 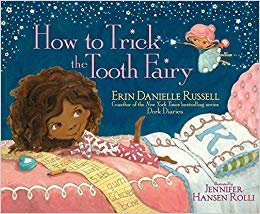 I wanted to write a picture book I would’ve been excited to read as a child. As a black author, promoting diversity is very important to me. Growing up, I loved to read, but it was hard to find books with heroes and heroines who looked like me.  In a subconscious way, it made me feel like an outsider, so I’m extremely thankful for the diverse book movement. I love seeing so many voices represented, and have made it my goal to represent little, black girls with big imaginations, and big, curly hair. It warms my heart every time I hear a young fan say, “Kaylee looks just like me!”

I also wanted to represent strong, female characters in my book. Kaylee and the Tooth Fairy are prank princesses who love pink and pretty things, but they don’t act like classic princesses. They’re smart, fierce, and love frogs and playing with their food! J Girls are often categorized as feminine or unfeminine, but I don’t believe in categories.  Girls come in all different shapes, sizes, and personalities, and I wanted to celebrate the diversity of femininity. I also wanted to celebrate female friendship. When bold girls like Kaylee and the Tooth Fairy unite, they’re a force to be reckoned with!

About Erin Danielle Russell
Erin Danielle Russell has been writing stories since she learned how to spell. When she grew up, she became coauthor of the New York Times bestselling Dork Diaries series with her mom, Rachel Renee Russell. She currently lives in Virginia with her husband, Jacob, and her spunky teddy bear, Stanley. When Erin’s not writing or daydreaming, she likes to cook, travel, play video games, and watch cartoons. Learn more here!