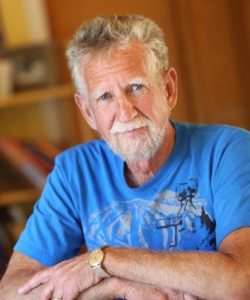 Where do you get your information or ideas for books?

I get most of my ideas for books from personal experiences. My best-known books are the ones in my Froggy series. All my Froggy books originated from experiences I had, mostly with my kids, Aaron and Sean, when they were growing up. In these books, I just exaggerate and use my imagination to make the stories funnier. Eg., my son Sean did catch the ball at the City Cup Soccer Championships and he wasn’t the goalie!

Even for my wildlife books and middle grade novels, I was inspired by my experiences. Three of my middle grade novels are called Aaron’s Wilderness Trilogy after my older son, Aaron London. The first book, DESOLATION CANYON, is based on our white-water rafting trip through DESOLATION CANYON when he was 11 years old and the journal he had kept during that week on the Green River. The characters were based on real people. Again, I used my imagination and exaggerated some of the experiences to enhance the thrill of the read (and the ride). BELLA BELLA and GRIZZLY PEAK were based on real experiences but with some other people mixed in. I did go on a 10-day sea kayak trip island hopping and living off the sea through the Inland Sea off the coast of British Columbia.

And for GRIZZLY PEAK, yes, I did kayak the chain of lakes through the mountains of B.C., and I did have an encounter with a grizzly bear much like the one in the book where it raided our camp while we were out fishing in our kayaks for breakfast.

I love to write books about wildlife and many of those are based on personal experiences as well. For LITTLE PUFFIN’S FIRST FLIGHT my wife Maureen and I flew to Newfoundland and obtained a permit to go out on a Zodiac with a bird expert and guide and spend a day on an island with the largest colony of puffins in the North Atlantic—over 200,000 puffins! What a day! And later we took a cruise up to Alaska and saw lots of puffins, and I ended up writing about the tufted Alaskan puffins, which have lots of similarities with their Atlantic cousins.

Most recently I wrote PUP THE SEA OTTER, illustrated by my younger son Sean London, who went on numerous trips with my wife and me to go see the sea otters in Monterey, Pacific Grove, and Point Lobos on the central coast of California.

My original idea was to write a book called I OTTER BE AN OTTER because I love to swim and I have gone swimming with otters! (Of course, one time my kayak capsized when I got hit by a tall wave while watching a sea otter playing on the surface around 10 feet away.) But then I did research on sea otters and was so fascinated that I ended up writing a more factually based picture book about otters.

When I research wildlife, I read everything I can find and I also try to contact experts in the field to check my facts before publishing.

How did you get started writing books?

When I was 6 or 7 I wrote and illustrated a cartoon that had 3 words, and all 3 words were the same. A boy is running toward a house and somebody yells “NOOO!”

He runs through a gate into a yard and somebody yells “NOOO!”

He bounces on a diving board, and as he does a swan dive he looks down and sees that the pool is empty. And he yells, “NOOOOOOOOOO!”

In college, I started writing poems and later some short stories, and I had around 200 poems and stories for adults published over a 20-year period. Literary magazines published my poems and stories and the most I ever received was $50, but usually I was just happy to get published and get a free copy of the magazine.

I had two sons late in my 30s and started telling them stories, and they liked them so I started writing them down. My first sale was THE OWL WHO BECAME THE MOON (though when it came out it was my 4th book by then) and it was a lullaby I told my sons in bed. When, then 5, memorized my story and told it to Sean, then 2, I knew I had a story to tell (and sell)! My first books to come out—THIRTEEN MOONS ON TURTLE’S BACK and THE LION WHO HAD ASTHMA (about Sean)—didn’t come out until I 45 years old!

My first Froggy book, FROGGY GETS DRESSED, was my 3rd book published. My sons were bored while I was driving home from a day of hiking at Point Reyes National Seashore, and they asked me to tell them a story.

Those first three books, from 25 years ago, are still in print.

What do you like to do when you’re not writing?

I love to write and try to write about four hours every day. But when I’m not writing I like to walk my dog, Toto (really!), with my wife, often at the beach in nearby Bodega Bay. When we have a few weeks off we sometimes like to go on long trips and do a lot of walking. For our last trip, we went walking along the coast of Cornwall and Ireland, looking out for whales and dolphins—and puffins! (And maybe tasting the local whiskey—just a nip!)

But mostly what I like to do when I’m not writing is to go swimming. I lap swim daily at the local Ives Pool in Sebastopol, and guess what?

About Jonathan London
Jonathan London has written more than one hundred picture books for children, many of them about wildlife. He is also the author of the popular Froggy series. He lives with his wife in northern California.