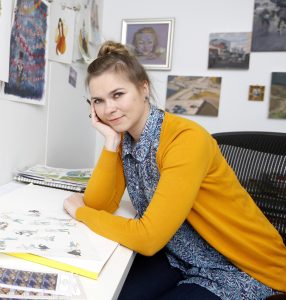 Who is your favorite kid-lit character?
Without a doubt that would be Pippi Longstocking by the Swedish author Astrid Lindgren. I think Lindgren is one of the best children’s book authors that ever lived. Her stories were so alive, funny, and exciting, but they could also be sad and real. And her characters were strong, but none of them as strong as Pippi. I think she was, and still is such a role model for girls. She could do anything. She had a strong will, she let no one tell her what to do. She was kind and helpful and taught her friends that it is ok to be outside of the ordinary, like taking care of herself, having a monkey for a pet and sleeping with her head where the feet should be. She was in control of her own happiness and her own life. And she could lift a horse with one arm. Girl power!

What did you love reading as child?
I read quite a lot as a kid. I actually think I read more as a kid than adult. I remember finding my fathers old children’s books and cuddling in my bedroom reading them one by one. The books were The Adventure Series andThe Famous Five books by Enid Blyton. I was reading those books in the late 80’s but they were published in the 40’s and 60’s. I remember the smell of the books, that old paper smell, I loved it. And I remember not understanding many of the words because they were words young people didn’t really use in the language any more. But oh man those stories were so exciting, I had never read anything as thrilling before! A group of kids, all by themselves, stranded on an island in a terrible storm in the middle of the night, trying to hunt down criminals….I still get goosebumps! 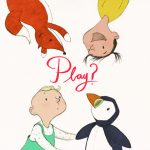 What is your favorite project?
Usually the project that I’m working on at the moment is my favorite. But it’s also my least favorite at the same time! It’s an exciting but also such an uncomfortable stage when you are in the middle of creating a project. It never leaves you and is constantly in your head – and my head is like “Yes, this is awesome!”but at the same time it’s like “Linda, what are you thinking? Go bake a cake or something…”! But I’m seriously excited about this one I have to say. It’s a wordless picture book and I’m optimistic that it’ll turn into a book rather than a cake.

About Linda Olafsdottir
Linda Olafsdottir draws, paints, and writes from her home studio in in Reykjavík, Iceland. She has been nominated for the Astrid Lindgren Memorial Award and received Reykjavík’s Children’s Literature Award in 2016. Play? is her debut book as an author and illustrator.