The Snowy Day Forever Stamps to be Issued by USPS This Fall! 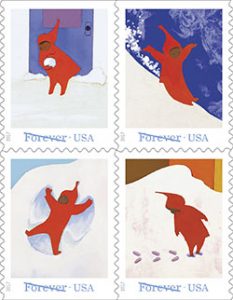 The Ezra Jack Keats Foundation is thrilled to announce that the USPS will be issuing The Snowy Day ​​Forever stamps ​early this Fall!​

Based on the classic children’s book by Ezra Jack Keats, The Snowy Day, published in 1962, was one of the first mainstream publications to feature an African American child.

The stamps can be pre-ordered in early Sept. at usps.com/shop for delivery shortly after the Oct. 4 nationwide issuance. Spread the excitement on social media using the hashtag #SnowyDayStamps.

A First-Day-of Issue Ceremony will be held on October 4th, 2017 at the Brooklyn Public Library Central Library at 10:30am. More information about this event can be found below, and at this link.

WHAT: First-Day-of-Issue dedication ceremony for The Snowy Day Forever Stamps that are based on a children’s book by Ezra Jack Keats. The event is free and open to the public. Please share the news using the hashtag #SnowyDayStamps.

BACKGROUND: The U.S. Postal Service showcases Ezra Jack Keats’ most beloved story, The Snowy Day. Written and illustrated by the celebrated children’s author, it was one of the first prominent 20th-century picture books centered on an African-American child. Each of the four new stamps in this 20-stamp booklet features a different illustration of main character Peter exploring and playing in his neighborhood while wearing his iconic red snowsuit. The images include Peter forming a snowball; sliding down a mountain of snow; making a snow angel; and leaving footprints in the snow. Art director Antonio Alcalá of Alexandria, VA, designed the stamps.  The stamps may be pre-ordered in early Sept. for delivery shortly after the Oct. 4 issuance at usps.com/shop.