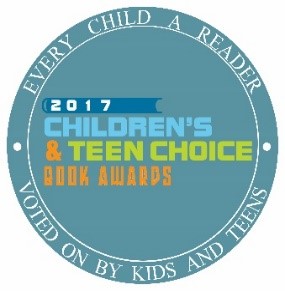 New York, NY – May 31, 2017 – Every Child a Reader, a nonprofit charity dedicated to inspiring a love of reading in children and teens, is proud to announce the winners of the 10th Annual Children’s & Teen Choice Book Awards.

The award finalists were chosen as follows: As supervised by the International Literacy Association, children in five school systems spread around the country read and discussed books in the picture book and middle-grade categories; books for teens were nominated online at TeenReads.com.

Then, the 7 finalists in each of the four categories were voted on nationwide via a COPA-compliant online voting site hosted by DOGObooks, as well as by voting ballots submitted by groups organized by teachers, librarians, and independent bookstore staff. Voting ended on May 7, 2017, the last day of Children’s Book Week, celebrating its 98th year with over 2,500 library, school, and bookstore events this year.

For the first time, the announcement of the winners took place late this afternoon at BookExpo, the national book trade show held at the Javits Center in a ceremony hosted by the National Ambassador for Young People’s Literature, Gene Luen Yang.

3rd – 4th Grade Book of the Year: ONCE UPON AN ELEPHANT by Linda Stanek; illus. by Shennen Bersani (Arbordale Publishing)