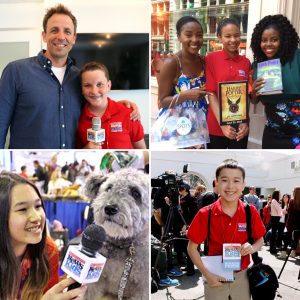 New York, NY – March 1, 2017 – The award-winning Scholastic News Kids Press Corps, a group of young journalists ages 10–14 from across the country and around the world, is now accepting applications for the 2017–2018 school year. Students with a “nose for news,” a passion for writing, and a strong interest in journalism are encouraged to apply. Applications must be received by May 31, 2017.

For more information about the Scholastic News Kids Press Corps and the application process, visit: www.scholastic.com/kidspress.

“The student journalists in this program serve a vital function in today’s media landscape,” said Suzanne McCabe, editor of the Scholastic News Kids Press Corps. “Each of the Kid Reporters in this talented group is on a mission to cover important issues and topics that kids care about. This long-running program plays a key role in fostering new generations of journalists. Several alumni of the program have gone on to become professionals, sharing their perspectives through local, national, and global media outlets.”