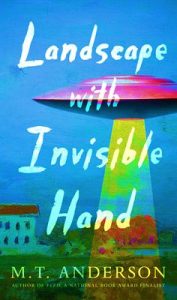 SOMERVILLE, MA — Candlewick Press announced today that it will publish a sharply wrought new satiric novel by M. T. Anderson, the gifted National Book Award–winning author of a wide range of titles in a variety of genres.Landscape with Invisible Hand , an exploration of art and truth that marks Anderson’s first return to a future-Earth setting since the now-classic Feed , is scheduled for release on September 12, 2017. Candlewick Press executive editorial director and associate publisher Liz Bicknell acquired world rights to the book from David McCormick of McCormick Literary.

Landscape with Invisible Hand takes its title from a painting by aspiring artist Adam, whose family is struggling in the wake of an alien invasion. With his parents’ jobs replaced by alien tech and no money for food, clean water, or medicine, Adam finds solace in painting Earth’s desolation — and in recording 1950s-style dates with his girlfriend for the aliens who, nostalgic for mid-century Earth culture, watch in a pay-per-minute format.

“On the surface, my new sci-fi novel is a meditation on identity and how we define ourselves as teens when everyone around us is shouting about who and what we should be. But in reality, it’s much more practical: It provides concrete advice about how to survive as a young artist during an alien colonization of the Earth. You’re welcome, in advance,” said Anderson.

Anderson’s previous books include Feed , a futuristic satirical novel widely lauded as one of the most important and pioneering works of the recent dystopian craze; Thirsty , a vampire novel; Burger Wuss , a revenge story set in a fast-food emporium; and New York Times bestsellers The Astonishing Life of Octavian Nothing, Traitor to the Nation, Volume I: The Pox Party , a National Book Award Winner, and Volume II: The Kingdom on the Waves , which trace the story of a fictional slave in pre–Revolutionary War Boston. Most recently, his nonfiction book Symphony for the City of the Dead: Dmitri Shostakovich and the Siege of Leningrad was named a New York Times Book Review Notable Children’s Book of the Year and a Kirkus ReviewsBest Teen Book of the Year, among many other honors.

Anderson’s editor, Liz Bicknell, said of Landscape with Invisible Hand, “This novel packs a huge punch. It’s about being an artist, the need for good health care, and how to survive the end of capitalism — all under the power of the vuvv, a globby alien culture whose gleaming spaceships hover above the failing Earth. And it’s funny.”

M. T. Anderson is the author of Feed , winner of the Los Angeles Times Book Prize; the National Book Award–winning The Astonishing Life of Octavian Nothing, Traitor to the Nation, Volume I: The Pox Party and its sequel, The Kingdom on the Waves ,both New York Times bestsellers and Michael L. Printz Honor Books; Symphony for the City of the Dead: Dmitri Shostakovich and the Siege of Leningrad ; and many other books for children and young adults. He lives near Boston, Massachusetts.

Candlewick Press is an independent publisher based in Somerville, Massachusetts. For over twenty years, Candlewick has published outstanding children’s books for readers of all ages, including books by award-winning authors and illustrators such as the National Ambassador for Young People’s Literature emeritus Kate DiCamillo, M. T. Anderson, Jon Klassen, and Laura Amy Schlitz; the widely acclaimed Judy Moody, Mercy Watson, and ’Ology series; and favorites such as Guess How Much I Love You , Where’s Waldo? , and Maisy. Candlewick is part of the Walker Books Group, together with Walker Books U.K. in London and Walker Books Australia. The Walker Books Group has a unique ownership structure that includes all of its employees worldwide. Visit Candlewick online at www.candlewick.com.