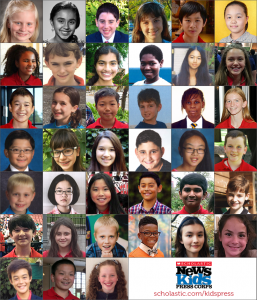 New York, NY — The award-winning Scholastic News Kids Press Corps™ today welcomed 24 new and 15 returning Kid Reporters, ages 10 to 14, from across the United States and around the world. The U.S. journalists from 19 states and the District of Columbia will report on current events, breaking news, entertainment stories, and sporting events. The largest team of international Kid Reporters to date will also be reporting from the United Kingdom, New Zealand, China, Thailand, Nigeria, and other African countries from onboard Mercy Ships.

The full list of Kid Reporters, along with their bios, can be viewed here: http://www.scholastic.com/kidspress

For more than 16 years, the Scholastic News Kids Press Corps has delivered “news for kids, by kids.” Stories by the Kid Reporters can be found in issues of Scholastic classroom magazines, which are read by more than 25 million students nationwide, and are available online at: www.scholastic.com/news.

The 2016–2017 members of the Scholastic News Kids Press Corps are:
* indicates new reporter