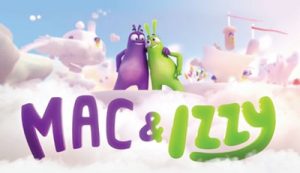 New York, NY — Global learning company Houghton Mifflin Harcourt (HMH), home to the ever-expanding subscription content service for kids Curious World, today announced the debut of Mac & Izzy, a short-form, 3D animated series for early learners that gives kids a glimpse into what their imaginary friends are up to when they aren’t playing with their humans.

Now streaming exclusively on YouTube Kids, Mac & Izzy was developed in partnership with BAFTA award-winning Blue-Zoo Productions and WGBH Boston, America’s preeminent public broadcaster and the largest producer of PBS content for TV and the web.

“At HMH, we are able to weave our expertise in the education space together with our long tradition of publishing celebrated children’s literature to create and deliver smart, engaging stories for young audiences across a variety of media,” said CJ Kettler, EVP and Chief of Consumer Brands and Strategy, Houghton Mifflin Harcourt. “In this spirit, we couldn’t be more excited to introduce our friends Mac and Izzy to the world via YouTube Kids, which gives us an amazing platform to reach families seeking safe, fun content to share with their children, whether at home or on-the-go.”

Mac & Izzy is currently available on the Curious World YouTube Channel, and will be featured on the YouTube Kids app throughout November.  Later this year, Mac & Izzy will become a part of the Curious World app’s content library, which has been downloaded more than 1 million times and offers than 1,200+ video shorts, games and books mapped to key early learning areas within a digital environment parents can trust.

“This engaging series inspires kids to use their imagination and explore different ways to solve the problems they are faced with. This is the kind of content that really resonates with YouTube Kids and we are delighted that HMH has decided to use the platform to bring the series to kids all over the world,” said Nadine Zylstra, Head of Family and Learning for YouTube Originals.

In seven original shorts now available, viewers will meet Mac and Izzy, two whimsical creatures who reside in Cloudville, an eccentric, magical community that is home to the world’s imaginary friends when they are “off-duty.” Thoughtful, creative Mac and ever-energetic, playful Izzy are lovable adventurers who use their imaginations to solve problems and puzzles for both their human friends and themselves – from feeling shy, to being afraid of the dark to learning new skills. Quirky, yet relatable, Mac and Izzy’s escapades offer real-world lessons in an accessible, age-appropriate and hilarious framework.

HMH’s Curious World features both original content – including animated and live-action shorts which inspire kids to engage and explore off-screen, from building paper bag cities in Get Crafty to learning Spanish with Jingle Bilingual – and licensed content from leading and celebrated production companies and distributors including They Might Be Giants (Disney Sound) and StoryBots (JibJab Bros. Studios).

Nominated for numerous children’s media and education awards, Curious World recently received a Teacher’s Choice Award for the Family from Learning Magazine, as well as a 2016 Cynopsis Kids Imagination Award for Best Tablet-Based App. Its original content has been nominated for prestigious international animation contests, including the Shanghai TV Festival, Annecy International Animated Film Festival and Cartoons on the Bay.

Houghton Mifflin Harcourt (NASDAQ:HMHC) is a global learning company dedicated to changing people’s lives by fostering passionate, curious learners. As a leading provider of pre-K–12 education content, services, and cutting-edge technology solutions across a variety of media, HMH enables learning in a changing landscape. HMH is uniquely positioned to create engaging and effective educational content and experiences from early childhood to beyond the classroom.  HMH serves more than 50 million students in over 150 countries worldwide, while its award-winning children’s books, novels, non-fiction, and reference titles are enjoyed by readers throughout the world. For more information, visit www.hmhco.com.