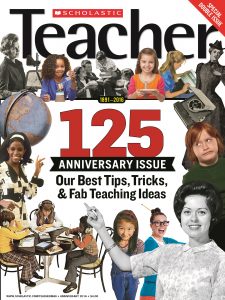 The Original Publication for Crowdsourcing Professional Development and Classroom Ideas, Scholastic Teacher Magazine Has Remained the Trusted Resource for K-8 Classrooms since 1891

New York, NY — November 10, 2016 — America’s longest-running magazine for teachers, Scholastic Teacher™, celebrates 125 years with an anniversary issue published by Scholastic (NASDAQ: SCHL), the global children’s education, publishing, and media company. Since its first print issue in 1891 to its impressive presence today online and in print with 525,000 monthly readers, the magazine has remained an innovative source of ideas and inspiration for teachers. To preview the 125th anniversary issue, visit: scholastic.com/scholasticteacher125.

Originally published as Normal Instructor, the anniversary issue of Scholastic Teacher will give readers an opportunity to witness the history of education and the evolution of the teacher in America as seen through its pages. This special issue explores facts found in the magazine’s archives, including:

Technology in 1894, or 1954, meant something very different than today. The anniversary issue includes:

The magazine even shared some dubious fashion advice for teachers, including:

“As our team dug into the archives, we uncovered the history of American education told through 125 years of teacher-to-teacher advice,” said Tara Welty, Vice President and Editor-in-Chief of Scholastic Teacher Resources. “We were delighted to find many creative suggestions are still relevant today…and a few odd ones that are best left in the past! This very special issue of Scholastic Teacher is sure to delight and surprise anyone interested in teaching and education.”

“I have kept copies of my first Instructor issues—from 1977! I devoured each issue as my beginning teacher ‘Bible,’ always looking for, and finding, new ideas and ways to keep my students engaged,” said Mary J. Dodds, an Iowa elementary teacher. “I have seen so many changes in education! Yet, students still love something intriguing and fun, and teachers are always looking for ways to be better, grow in learning, and keep excitement in our teaching. Fall will always smell like apples to me, holidays will always mean room parties and decorating, and spring will always feel electric as students prepare for summer. Instructor [now Scholastic Teacher] gave excitement to each season of my life as a teacher.”

Over the past three years alone, Scholastic Teacher has garnered eight prestigious awards for editorial and design, including a 2016 Folio: Eddie Award, two 2016 Jessie H. Neal Awards, and a 2016 AAP Distinguished Achievement Award.

For more information about Scholastic, visit our Media Room: http://mediaroom.scholastic.com