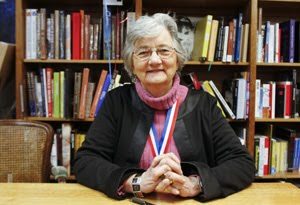 Somerville, MA — Candlewick Press will publish a new novel by Katherine Paterson, the two-time Newbery Medalist and National Book Award winner whose stories, including such indelible classics as Bridge to Terabithia and The Great Gilly Hopkins , have transported and inspired generations of readers.

The as-yet-untitled novel, set in Cuba, is intended for middle-grade readers and is scheduled for publication in the spring of 2018.

Paterson’s books have received all of the major honors in children’s literature, including not only the Newbery Medal and the National Book Award, but also the Hans Christian Andersen Medal and the Astrid Lindgren Memorial Award. A major film adaptation of The Great Gilly Hopkins , starring Kathy Bates, Glenn Close, Octavia Spencer, and Sophie Nélisse, debuted in the US on October 7, 2016.

Paterson, who is also a past national ambassador for young people’s literature, is often credited with pioneering realistic, emotionally resonant children’s fiction. A New York Times profile of Paterson published during her ambassadorship noted: “Ms. Paterson does not shy from dark themes that some have considered inappropriate for young readers. And she has a finely tuned sense of the whirling, complex and not-always-sunny emotions of children.”

The forthcoming novel will be a return to Candlewick Press for Paterson. Candlewick published The Flint Heart , her retelling, with her late husband John Paterson Sr., of Eden Phillpotts’s 1910 fantasy, in 2011, to acclaim including that book’s being named a Best Book of the Year by Publishers Weekly and by the Boston Globe.

“We could not be more delighted to be publishing a luminous new work from this profoundly gifted author,” said Karen Lotz, President and Publisher of Candlewick Press and Managing Director of the Walker Books Group, who acquired world rights for the book from Allison Cohen at the Gersh Agency.

ABOUT THE AUTHOR
Katherine Paterson is a two-time winner of the Newbery Medal and the National Book Award, and she has received many other accolades for her works, including the Hans Christian Andersen Medal, the Astrid Lindgren Memorial Award, and the Governor’s Award for Excellence in the Arts. Some of her most famous works are The Master Puppeteer , The Great Gilly Hopkins , Bridge to Terabithia and Jacob Have I Loved . She lives in Montpelier, Vermont, USA.

ABOUT CANDLEWICK PRESS
Candlewick Press is an independent publisher based in Somerville, Massachusetts. For over twenty years, Candlewick has published outstanding children’s books for readers of all ages, including books by award-winning authors and illustrators such as the National Ambassador for Young People’s Literature emeritus Kate DiCamillo, M. T. Anderson, Jon Klassen, and Laura Amy Schlitz; the widely acclaimed Judy Moody, Mercy Watson, and ’Ology series; and favorites such as  Guess How Much I Love You ,  Where’s Waldo? , and Maisy. Candlewick is part of the Walker Books Group, together with Walker Books U.K. in London and Walker Books Australia. The Walker Books Group has a unique ownership structure that includes all of its employees worldwide. Visit Candlewick online at  www.candlewick.com.