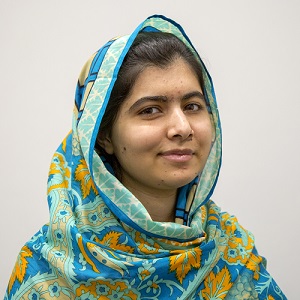 Inspired by her own childhood wish, Malala’s Magic Pencil shares her dream for a magic pencil to help make the world a better place. At first Malala wanted to use her magic pencil to fix problems like the smell of the trash dump near her home and to make everyone in her family happy. But as she grew older, she saw a world that needed fixing, with many important things to wish for—and she realized that even if she never found a magic pencil, she could still work every day to make her wishes come true.

This beautifully illustrated volume will share Malala’s story with young children and inspire them with her worldview and her true magic of finding hope all around her, even in difficult times.

“So many younger children have asked about my story and about my message of education for all children,” said Malala. “I hope this picture book will help them to believe in themselves, recognize the power of the pen, and follow their dreams.”

“Malala is an inspiration to people of all ages,” said Megan Tingley. “We are thrilled to be working with her to bring her story to a younger audience.”

Malala Yousafzai, the educational campaigner from Swat Valley, Pakistan, came to public attention by writing for BBC Urdu about life under the Taliban. Using the pen name Gul Makai, she often spoke about her family’s fight for girls’ education in her community. In October 2012, Malala was targeted by the Taliban and shot in the head as she was returning from school on a bus. She miraculously survived and has continued her campaign for education. In recognition of her courage and advocacy, Malala was honored with the National Youth Peace Prize in Pakistan in 2011 and won both the International Children’s Peace Prize and the Amnesty International Ambassador of Conscience Award in 2013. She is the youngest winner of the Nobel Peace Prize and was named one of Time’s 100 Most Influential People in the World. Malala continues to champion universal access to education through the Malala Fund.

ABOUT THE MALALA FUND

Malala Fund is working for a world where all girls can learn for twelve years and lead without fear. Malala Fund advocates for resources and policy change needed to give all girls a secondary education, invests in developing country educators and activists, and amplifies the voices of girls fighting for change. Learn more at malala.org.

Kerascoët is the pseudonym for New York Times bestselling husband-and-wife illustrator team Sébastien Cosset and Marie Pommepuy. Publishers Weekly has called their comics and graphic novel work “unforgettable.” Best known for illustrating the book Miss Don’t Touch Me, written by Hubert, as well as select Lewis Trondheim Dungeon books, their most recent work includes Beautiful Darkness (2014), cowritten with Fabien Vehlmann, which broke out in the US, winning them wide recognition and high praise. It was also a Publishers Weekly best book of the year. In addition to illustrating for publishers, their clients have included jewelers Van Cleef & Arpels and upmarket French department store Galaries Lafayette. They live and work in Paris in the worlds of cartooning and illustration.

Little, Brown Books for Young Readers is a division of Hachette Book Group, a leading trade publisher based in New York and a division of Hachette Livre (a Lagardère company), the third-largest trade and educational publisher in the world. HBG is made up of eight publishing groups: Little, Brown and Company; Little, Brown Books for Young Readers; Grand Central Publishing; Perseus Books; Orbit; Hachette Books; Hachette Nashville; and Hachette Audio. For more information, visit hbgusa.com.