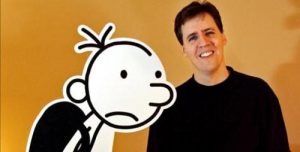 New York, NY — Amulet Books, an imprint of ABRAMS, announces a new global in-print number for the #1 bestselling Diary of a Wimpy Kid series, as well as the bookseller hosts and dates for Jeff Kinney’s North American tour to support the release of Double Down, the 11th book in the blockbuster series that has captured the attention of readers everywhere.

Upon publication of Book 11 on November 1, 2016, there will be more than 180 million copies of all Wimpy Kid books in print—from an initial print run of 25,000 of the first book in 2007—in more than 61 editions. In the United States, the United Kingdom, Canada, Germany, Australia, Turkey, Greece, Japan, Brazil, Spain, Catalonia, Romania, Portugal, Hungary, Sweden, Latvia, Norway, Taiwan, Israel, and Korea, the respective publishers will be promoting in their territories the latest book though major marketing campaigns, publicity, social media activity, and retail promotions.

“Incredibly, as Diary of a Wimpy Kid approaches the tenth anniversary of its publication in 2017, the series continues to attract new readers and delight returning ones,” says Michael Jacobs, president and CEO of ABRAMS. “Already one of the biggest selling series of all time, it is now poised to pass yet another amazing milestone with its classic status.”

Jeff Kinney’s global tour will continue, beginning on Book 11’s publication day and continuing through December. It includes more than 20 stops on three continents. In the United States, Kinney will launch the book in major media and at events in Washington, D.C., and continue on (see below). The North American tour will culminate in New York, NY, as Kinney walks with the brand-new giant helium balloon of Diary of a Wimpy Kid’s Greg Heffley in the 90th Annual Macy’s Thanksgiving Day Parade.

“I’m incredibly excited to travel in North America again for part of my tour, especially to Salt Lake City and Sacramento, where I have not appeared before,” says Jeff Kinney. “My first global tour was an amazing, uplifting experience. I am looking forward to incorporating North American cities—and to marching with the brand-new Wimpy Kid balloon!”

Kinney’s international travels for Book 11 will bring him to England, Germany, Israel, France, India, the Philippines, and South Korea.

This new book follows the enormous international acclaim of Book 10, Old School, which debuted at the top of bestseller lists around the world and has remained a bestseller since it was published on November 3, 2015. It was one of the top-ranked titles—children’s or adult—of the year, and continues to dominate sales charts in 2016.

The first-ever theatrical adaptation of Diary of a Wimpy Kid was staged by the prestigious Children’s Theatre Company in Minneapolis from April to June 2016. It earned rave critical reviews and had sold-out shows. Three movies based on the book series have grossed more than $250 million. Production of a fourth movie, based on The Long Haul, was recently announced, and it is scheduled to hit theaters in May 2017. Jeff Kinney has won six Nickelodeon Kids’ Choice Awards and two Children’s Choice Book Awards. Books in the series have won numerous awards that were voted on by students and teachers around the globe.

Kinney’s work has been widely praised for its ability to turn reluctant readers on to books. Published in 2007, the first Diary of a Wimpy Kid book was an instant bestseller, and just a year later, more than 100,000 copies were in print in the United States alone. The Diary of a Wimpy Kid series is a fixture on the USA TODAY, Wall Street Journal, Publishers Weekly, and IndieBound bestseller lists. It has remained on the New York Times bestseller list since the publication of the first book and through the release of Book 10 for more than 497 weeks total, and for more than 393 weeks on the series list. Wimpy Kid books have been sold in more than 61 editions in 52 languages and appear on bestseller lists around the world. There are now more than 180 million books in the series in print around the globe.