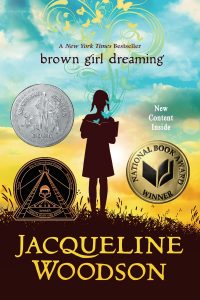 New York, NY — Puffin Books, an imprint of Penguin Young Readers, will publish New York Times bestselling author Jacqueline Woodson’s memoir in verse, Brown Girl Dreaming, for the first time in paperback this October. A poignant memoir told in stunning verse, Brown Girl Dreaming is the story of Woodson’s memories growing up as an African-American in the 1960s and 1970s, in Ohio, South Carolina, and Brooklyn, New York, just as the Civil Rights movement was gaining momentum. The paperback edition will include seven new original poems by Woodson.

Touching and powerful, each poem is both accessible and emotionally charged, each line a glimpse into a child’s spirit as she searches for her place in the world. Woodson’s eloquent poetry also reflects the joy of finding her voice through writing, despite the fact that she struggled with reading as a child. Her love of stories inspired her and stayed with her, creating the first sparks of the gifted writer she was to become.

Jacqueline Woodson (www.jacquelinewoodson.com) is the 2014 National Book Award Winner for her New York Times bestselling memoir BROWN GIRL DREAMING, which was also a recipient of the Coretta Scott King Award, a Newbery Honor Award, the NAACP Image Award and the Sibert Honor Award. She is also the author of New York Times bestselling novel ANOTHER BROOKLYN (Harper/Amistad), a #1 Indie Pick in 2016 and Woodson’s first adult novel in twenty years. Woodson was named Young People’s Poet Laureate (2015-2017) by the Poetry Foundation.  She is the author of more than two dozen award-winning books for young adults, middle graders and children; among her many accolades, she is a four-time Newbery Honor winner, a three-time National Book Award finalist, and a two-time Coretta Scott King Award winner. Woodson’s many other books include, IF YOU COME SOFTLY, THE OTHER SIDE, EACH KINDNESS, BENEATH A METH MOON which is currently being adapted for the screen, the Caldecott Honor Book COMING ON HOME SOON; the Newbery Honor winners FEATHERS, SHOW WAY, and AFTER TUPAC AND D FOSTER, and MIRACLE’S BOYS which received the LA Times Book Prize and the Coretta Scott King Award and was adapted into a miniseries directed by Spike Lee. Jacqueline is also the recipient of the Margaret A. Edwards Award for lifetime achievement for her contributions to young adult literature, the winner of the Jane Addams Children’s Book Award, and was the 2013 United States nominee for the Hans Christian Andersen Award. She is the 2016 Bobi Award (Best of Brooklyn) winner and lives with her family in Brooklyn, New York