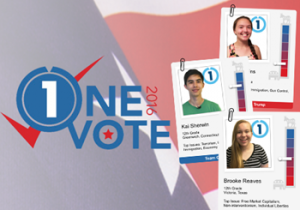 BOSTON, MA – Channel One News, a Houghton Mifflin Harcourt company, today announced the eight students who will represent the political views of America’s youth vote leading up to the presidential election this fall. These students will provide commentary for OneVote 2016, the student mock election that will take place in upper elementary, middle and high schools across the country this fall.

“In the past, our young voters have largely shown preference for the same candidate as their parents, but the post-millennial generation is forming their own political opinions,” said Angela Hunter, SVP and Executive Producer at Channel One. “Many of the issues they care about, such as access to affordable education and addressing climate change, have not been a primary focus in the presidential election to date. It’s important to give Generation Z a platform to have their voices heard.”

The 2016 OneVote contributors will represent the opinions of the youth vote by serving as on-air political commentators and producing content for Channel One’s YouTube channel. This year’s group range in age from 13 and 18 and cover the political and geographic spectrum of the United States:

Each of the students will be sharing their perspectives and giving voice to issues important to their generation, including many that have not been a focus of the election to date, such as climate change and access to affordable education. Their contributed content will feature exclusively for Channel One News throughout the rest of the campaign.

About Channel One News

Channel One News, a Houghton Mifflin Harcourt (HMHC) company, is a digital content provider focused on encouraging young people to be informed, digital-savvy global citizens. The Company’s primary offering, Channel One News, is a daily news program with supplementary educational resources, aligned to Common Core State Standards (CCSS), to help students, teachers and parents interpret the news of the day and spark important conversations. The Peabody and Telly award-winning Channel One News program is broadcast to approximately 5 million young people in upper elementary schools, middle schools and high schools across the country.

Houghton Mifflin Harcourt (NASDAQ:HMHC) is a global learning company dedicated to changing people’s lives by fostering passionate, curious learners. As a leading provider of pre-K–12 education content, services, and cutting-edge technology solutions across a variety of media, HMH enables learning in a changing landscape. HMH is uniquely positioned to create engaging and effective educational content and experiences from early childhood to beyond the classroom. HMH serves more than 50 million students in over 150 countries worldwide, while its award-winning children’s books, novels, non-fiction, and reference titles are enjoyed by readers throughout the world. For more information, visit www.hmhco.com.