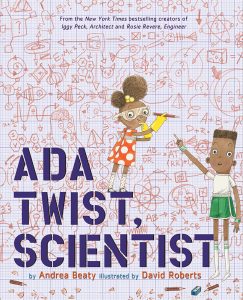 New York, NY — Abrams Books for Young Readers, an imprint of ABRAMS, announced today that Ada Twist, Scientist is the fastest selling picture book release of the year. The companion to the bestselling picture books Rosie Revere, Engineer and Iggy Peck, Architect, by the powerhouse team of Andrea Beaty and David Roberts, is an instant #1 New York Times bestseller, #1 National Indie bestseller, Wall Street Journalbestseller, USA Today bestseller, and Publishers Weekly bestseller. The story about the power of curiosity in the hands of a child who is on a mission to use science to understand her world is a celebration of girls in STEM, perseverance, and passion. It went on sale on Tuesday, September 6th with an announced first print of 250,000, and ABRAMS has already rushed back to press for an additional 100,000 copies. The in-print tally for all three books is over one million copies.

“Week one sales for Ada Twist, Scientist have been truly exceptional!” says Andrew Smith, senior vice president and publisher of ABRAMS Children’s Books. “It’s been thrilling to watch the incredible response to the first two books—Iggy Peck, Architect and Rosie Revere, Engineer—continue to grow even several years after publication, and to have witnessed the enormous anticipation for Ada. There is a grassroots enthusiasm around the importance of STEM education, and we’re thrilled to see the messages in these amazing books that Andrea and David created generate such excitement among parents, teachers, librarians, booksellers, and of course, kids themselves.”

Inspired by women thinkers and scientists such as Ada Lovelace and Marie Curie, Ada Twist, Scientist champions the talent of girls and women, and brings welcome diversity to picture books about girls in science with its African American main character. Touching on themes of never giving up and problem solving, Ada learns that her questions might not always lead to answers, but rather to more questions, and that is the heart of the scientific process. The book is the perfect tool to remind both young girls and women that they have the intelligence and perseverance to achieve their dreams.

“Andrea and David have worked for more than a decade to create this brilliant series of books about respecting and supporting the intelligence and creativity of children,” says Susan Van Metre, vice president and editor-in-chief of ABRAMS Children’s Books. “Iggy Peck and Rosie Revere have become staples of childhood—and Ada Twist seems poised to join them. It’s a testament to the power—and the need—for children’s books that honor the freedom of children to pursue their particular passions, unfettered by an adult agenda.”

The extensive multifaceted marketing campaign for Ada Twist, Scientist began in January with a successful cover reveal that was done simultaneously on social media and live with author Andrea Beaty at the American Library Association Mid Winter Conference, where a large crowd of eager librarians gathered to celebrate the book and STEM learning. Author Andrea Beaty kicked off her massive road tour at the Decatur Book Festival, and is currently touring to bookstores, schools, libraries, maker spaces, bookseller conferences, and book and science festivals in over 20 cities. Additional events to come include the National Book Festival and The Texas Book Festival, and her tour continues throughout November. ABRAMS is supporting the book with advertising—both traditional and digital—as well as retail promotions. Ada Twist, Scientist was selected as the cover for the ABC Best Books Catalog, available in October from the American Booksellers Association. There is also an extensive grassroots social media campaign, and downloadable assets such as a teaching guide, activity kit and book trailer available.