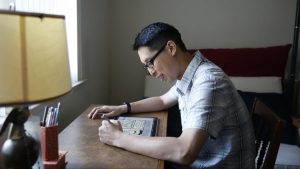 Yang, who is currently on tour for the second book in his Secret Coders series, hopes to put the grant towards his work as a comics creator and as National Ambassador.

As a teacher, my primary role as a teacher is as the National Ambassador for Young people’s Literature through the Library of Congress, and there are a number of different things we’ve been talking about for a while, but we weren’t sure where the resources to do those things would come from — and now I have access to resources. I’m hoping I’ll be able to do some of those things before my term ends at the end of 2017. (Los Angeles Times)