The Evolution of Children’s Literature 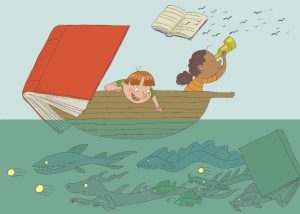 According to Lerer, children’s books originated in the 1740s and were written to instill moral behavior. The alleged Golden Age of children’s literature that extended from the Victorian era until the Second World War, presented an idealized portrait of childhood.

Contemporary children’s and young adult books such as Harry Potter tap into aspects of cherished classics, while speaking to modern anxieties including feminism and individuality.

You need the didacticism in order to have the subversion; they go hand in hand. You have to know what you’re subverting. The moral, ethical, and social categories that were instilled in the children’s rooms, these are things that get challenged in the playful nonsense of Lewis Carroll or Edward Lear, in Shel Silverstein and Captain Underpants. (Nightlight)