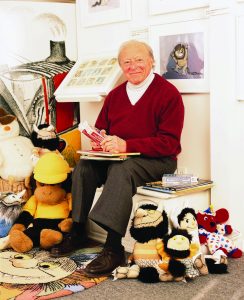 Mr. Schindel found that a special filming technique was needed to faithfully transfer the artwork of children’s picture books from page to screen. He developed the iconographic style of filmmaking, in which original artwork from an open book glides in front of a motion picture camera, giving the still imagery cinematic life. By moving the pictures at deliberate, controlled speeds, the camera captures the mood and action that the illustrator conveyed on the pages of the book.

Born in Orange, NJ in 1918, Schindel moved to New York City after college and worked as a clerk in Stern’s Department Store. In 1941, he founded ELMOR Manufacturing Company, a machine shop, but he battled tuberculosis and in 1944-45, moved to Saranac Lake, NY to convalesce. In 1949-50 he tried his hand at film but the company he worked for, Teaching Films, went bankrupt and he became an independent producer. In 1951, he was recruited to serve as Film Officer and Attache in the U.S. Embassy in Ankara, Turkey, and then returned to Connecticut in 1953 to launch Weston Woods Studios. The company struggled in the early years but in 1966, the federal government passed the Elementary and Secondary Education Act (ESEA) and the first school libraries were opened. Weston Woods’ sales quadrupled overnight.

As the company grew in profitability, it also gained prestige, receiving an Academy Award nomination for best animated short in 1984 for “Doctor DeSoto,” based on the children’s book “Doctor Desoto” by William Steig, and the Andrew Carnegie Medal for Excellence in Children’s Video in 1996 for “Owen,” based on “Owen” by Kevin Henkes. In 1996, Weston Woods Studios was acquired by Scholastic, the global children’s publishing, education and media company, with Mr. Schindel staying on as an advisor to Weston Woods which has gone on to produce more than 200 additional films based on the books of Scholastic and all publishers. Produced by Paul Gagne, Linda Lee and three others who were on Schindel’s original team, these films have been honored with innumerable prizes including 15 Carnegie Medals awarded by the American Library Association for best video of the year based on a children’s book.

Richard Robinson, chairman, president and CEO of Scholastic, said, “Mort Schindel not only founded the art form and business of creating films based on outstanding children’s books, he also helped generations of teachers and librarians understand how they could reach more children with these great stories through the medium of film, video and television. He pioneered this important art form by working with hundreds of authors and illustrators including Maurice Sendak, William Steig , and Robert McCloskey, winning their support by making creative films like Where the Wild Things Are, Blueberries for Sal, Harold and the Purple Crayon, and The Amazing Bone which adhered absolutely to the spirit and story of the original printed work.”

Morton Schindel never stopped innovating. From 1982 to 2016, Schindel served as Chairman of the Board of Directors of the Weston Woods Institute, a non-profit organization for the support of innovative techniques for educational and cultural communications with children. In 1996, he founded Mediamobiles, Inc., a company that developed mobile multimedia learning environments.

Mr. Schindel received numerous awards and honors including The Regina Medal, awarded each year for a lifetime contribution to the field of children’s literature, the Distinguished Service Award from the Association of Education Technology, The Action for Children’s Television Hall of Fame Award and the American Libraries Services for Children Lifetime Achievement Award for “reaching children from the hills of Appalachia to the suburbs of Toyko with books, films, stories and songs.” He also received the Distinguished Alumnus Award from Teachers College, Columbia University as the only graduate “who never earned a dime as a librarian or a classroom teacher” but nonetheless became “a teacher to millions.”

Mort Schindel loved to share advice with his colleagues, advising them to “find a job you love and you’ll never work a day in your life.” Because he worked with “beautiful works of art and a wonderful parade of people,” he said, “Who could have it better? I wouldn’t trade my life with anyone.”

Mr. Schindel graduated from the Wharton School of Finance at the University of Pennsylvania with a B.S. in Economics and received his Masters in Curriculum and Teaching at Columbia Teachers College. He is survived by his wife, Cari Best of CT, a sister, Elaine Martens of NJ, children, grandchildren, great-grandchildren, nieces and nephews.