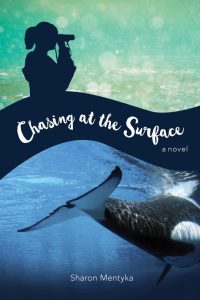 I belong to the most privileged group in our culture: white,
heterosexual, and able-bodied. And although my female gender brings me down a
notch or two, my race membership alone gives me a winning lottery ticket in
life.

So when I began to write books for children in earnest, one
piece of advice from an instructor in my MFA program seemed to suit me. “People
will tell you to only write about what you know,” she said. “Don’t listen to
them. Instead, write about the things you want to learn.” There was so
much I wanted to learn. And the stories I yearned to write begged for research,
listening, and learning.

Then I made a mistake. One that would have perpetuated a
racist stereotype had I not been saved by a sensitivity reader.

My forthcoming middle-grade novel, “Chasing at the Surface,”
set in the Pacific Northwest, tells the story of a 12-year old girl whose
mother mysteriously leaves home just as a pod of orca whales become trapped in
an enclosed inlet. The setting for the book borders the ancestral lands
of the Suquamish Tribe, who have lived in Central Puget Sound, across from
present-day Seattle, for approximately 10,000 years. Like many Coast Salish
people, orca whales are central to their stories, art and culture. Early on, I
made numerous contacts with tribal members, checking facts, word translations,
traditions and references—the hard facts that I hoped to include in my
book.

Yet my characterization of one young Suquamish veered
dangerously into stereotype when I singled him out as the only one struggling
with domestic issues, self-esteem and alienation from his own culture, and turning
to white culture to be “saved.” In fact, as I later learned, the Suquamish put
the majority of their resources towards caring for their children and
elders. They are the Tribe’s top priority and the situation I had blindly presented
in my initial draft would never have been allowed to happen.

The experience froze my liberal white heart. How was it possible
that, despite best intentions, I made a blunder that would have ended up
hurting the very readers I had set out to serve?

The answer is easy; Best intentions mean nothing.

Intentions are conscious. My biases were unconscious, born
out of my frame of reference as a white person of privilege. Because really, we’re
not aware of walking until we put on a pair of too-tight shoes. I had become so
accustomed to the inherent ”truth” of these deep-rooted stereotypes, activated
and reinforced by social mores and media, that I completely failed to notice what
was glaringly apparent and offensive to a member of a marginalized community
and to me once it was pointed out to my conscious mind.

But failure to notice privilege does not diminish its
effects.

Let me be clear here. Many who embody the definition of
privilege do not yet acknowledge the power of their position, either through
inattention, fatigue, or disbelief. We know that publishing is overwhelmingly white,
with an industry-wide average of 79%. Yet we are all still making unimaginable
mistakes.

Because of inherent biases, editors either don’t notice or
overlook language in titles or illustrations that reference myths and metaphors
that hold strong negative meanings to marginalized communities. Books that give
a false representation of the brutal history of slavery continue to be
published to starred reviews. Stories with protagonists of color still emerge
with their covers whitewashed. Without a concerted effort to take notice, to
train our conscious awareness of how our inherent biases affect our
understanding, actions, and decisions, we will always operate out of this position of privilege to the detriment
of those with less power.

So what is the way forward when the problem seems to exist at
every step of the way, from manuscript idea, to writer, to agent, to editor, to
publisher, illustrator, promoter, reviewer, and librarian? You’re trying to do
the right thing, but it seems as if no matter what you do, it’s always wrong.
It feels so unfair.

Good. This is how it should be.

For too long, those of us in positions of privilege have
been far too comfortable. If there is any chance of affecting real change,
shifting the paradigm, we need to be okay with feeling uncomfortable, okay with
having every action we take watched and evaluated. We all know there are more
books about animals than there are about children of color. If diversity is
going to be more than just an industry buzzword, each of us needs to find our
own power to give to the cause. Each of us who occupies a position of privilege
needs to make our own decisions on where we stand, how uncomfortable we are
willing to be, how we will make sure that the stories we tell are told
sensitively and from a place of truth.

So where is your
power? Are you a reviewer who can look beyond author and publisher marketing
and evaluate books for explicit and implicit racism? Are you a librarian who
can push your supervisors to shelf books by or about people of color in the
“Fiction” section rather than “Multicultural Fiction?” Are you a marketing exec
who can help counter the mistaken notion that the only audience out there worth
marketing to is a white audience?

And writers? Seeing the world through someone else’s eyes is
a challenge. But isn’t that what writers do, as we examine our own racial
experiences as both a mirror to ourselves and a window to the world around us?
Yes, it’s a fine balance. But it’s not a good enough reason for not making the
attempt, which only perpetuates what the writer and journalist Nisi Shawl calls,
“the greater failure of exclusion.”

Sharon Mentyka is a writer and teacher in Seattle with an
MFA from the Whidbey Writers Workshop. Her stories and essays for both children
and adults have appeared in numerous literary magazines. B in the World, an illustrated children’s chapter book about a
gender non-conforming child was published in 2014. Chasing at the Surface, her debut novel for middle grade readers,
inspired by an actual visit of orca whales to an enclosed inlet in the Pacific Northwest, will be
published by WestWinds Press in October. SharonMentyka.com