Global Tour to Continue For Release of Book 11, Diary of a Wimpy Kid: Double Down 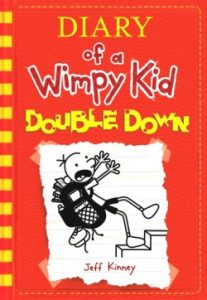 NEW YORK, NY — Amulet Books, an imprint of ABRAMS, today announced both the international countries and domestic US cities for bestselling author Jeff Kinney’s continuing global author tour. Promoting the release of book 11, Diary of a Wimpy Kid: Double Down, the itinerary will begin on worldwide publication day, November 1. It includes more than 20 stops on three continents through mid-December and into the beginning of the new year. Exact dates and locations for all events will be announced soon. Jeff Kinney’s international travels for book 10, Diary of a Wimpy Kid: Old School, were a huge and ground-breaking success bringing laughter, literacy and commercial success around the world. Upon completion of this latest tour, Kinney will have visited more than 20 countries on three continents around the world. Kinney will meet tens of thousands of fans and is expected to sell millions of books.

Participating Wimpy Kid book 11 tour publishers include the originating publisher, ABRAMS, in the United States, Canada, and the Philippines; Penguin Random House in the United Kingdom and India; Bastei Lübbe in Germany; Kinneret Zmora in Israel; Il Castoro in Italy; and Mirae-N in Korea. Two additional countries will be announced. Kinney stopped recently in Iceland, where he was seen on national media and met with fans.

In the United States, Kinney will be traveling to key markets for the series. The tour will launch on November 1, publication day, in Washington, DC, with major media, an appearance at the Library of Congress, and a visit to one of Kinney’s childhood elementary schools. Later in the season, Kinney will make his first-ever public appearance in Salt Lake City, UT, before traveling up the west coast from San Diego, CA, to Vancouver, BC.

“I’m incredibly excited to travel in the States again for part of my tour, and also thrilled to visit more places where Wimpy Kid has impacted the lives of young readers,” says Jeff Kinney. “My first global tour was an amazing, uplifting experience. I am looking forward to visiting so many new places this November and December.”

Working closely with local publishers abroad and booksellers in the US, Kinney will be featured in major media outlets, meet thousands of fans during author events held in major venues, and will discover local cultures. A dynamic multi-platform social-media campaign, which will include videos documenting each tour stop, will be coordinated with all publisher and bookstore partners.

“Diary of a Wimpy Kid is a global phenomenon that continues to delight and create millions of kids as readers around the world. Jeff Kinney’s enthusiasm for meeting and engaging with his fans—here in the States and around the globe—is equally phenomenal,” said Michael Jacobs, President and CEO of ABRAMS. “We’re thrilled to help make it happen and double down on our efforts to bring the books and reading to an ever larger and wider audience.”

The first-ever theatrical adaptation of Diary of a Wimpy Kid was staged by the prestigious Minneapolis Children’s Theatre Company from April to June 2016. It earned rave critical reviews and had sold out shows. Three movies based on the book series have grossed more than $250 million. Production of a fourth movie, based on The Long Haul, was recently announced. Jeff Kinney has won six Nickelodeon Kids Choice Awards and two Children’s Choice Book Awards. Books in the series have won numerous awards that were voted on by students and teachers around the globe. Wimpy Wonderland Island on poptropica.com, a virtual world for kids, remains one of the most visited pages on the popular website.

Kinney’s work has been widely praised for its ability to turn reluctant readers on to books. Published in 2007, the first Diary of a Wimpy Kid book was an instant bestseller, and just a year later, more than 100,000 copies were in print in the United States alone. The Diary of a Wimpy Kid series is a fixture on the USA Today, Wall Street Journal, Publishers Weekly, and IndieBound bestseller lists. It has remained on the New York Times bestseller list since the publication of the first book and through the release of book 10 for more than 482 weeks total, and for more than 378 on the series list. Wimpy Kid has been sold in more than 53 editions in 50 languages and appears on bestseller lists around the world. There are now more than 165 million books in the series in print around the globe.