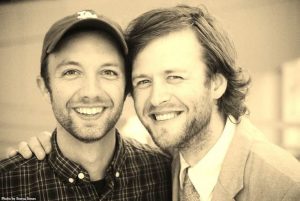 Somerville, MA — Bestselling picture book creators Mac Barnett and Jon Klassen will debut a new trilogy in 2017, Candlewick Press announced today jointly with the publishers of the Walker Books Group worldwide. The first book of the trio, Triangle, will publish in March with the next book to follow in 2018 and the final title in 2019. With multiple New York Times bestsellers between them and awards including the Caldecott Medal, two Caldecott Honors, a Theodor Seuss Geisel Honor, the Boston Globe—Horn Book Picture Book Award, two  E.B. White Read-Aloud Awards, the Charlotte Zolotow Prize, and many more, Barnett and Klassen have become one of the most dynamic duos in children’s literature.

In the hilarious series debut, Triangle plays a sneaky trick on his friend Square. Or is it Square who has played a trick on Triangle? Evoking whimsy and mischief in equal measure, this shifty-eyed, clever tale showcases Barnett’s signature deadpan wit and Klassen’s mastery of visual comedy. Young readers will find themselves asking who they can trust in a richly imagined world full of shapes. World rights to Triangle were acquired by Liz Bicknell, Candlewick’s executive editorial director and associate publisher, from Steven Malk of Writers House. The trilogy will be edited by Bicknell and designed by executive art director Ann Stott.

Of this new trilogy, Bicknell says, “Who knew that Triangle was a three-pronged prankster? And that friend Square could double the trouble? Apparently the brilliant Mac Barnett and Jon Klassen did.”

Triangle will release worldwide the week of March 27, 2017.

ABOUT THE AUTHOR Mac Barnett is the author of many award-winning books for children, including Sam and Dave Dig a Hole , illustrated by Jon Klassen, which received a Caldecott Honor, the E.B. White Read-Aloud Award, and an Irma Black Award and was short-listed for the Kate Greenaway Medal. He also writes the Terrible Two series with Jory John and the Brixton Brothers series of mysteries, and is the author of President Taft Is Stuck in the Bath , illustrated by Chris Van Dusen, and the Caldecott Honor-winning Extra Yarn , illustrated by Jon Klassen. Mac Barnett lives in California.

ABOUT THE ILLUSTRATOR Jon Klassen is the creator of the much-acclaimed hat trilogy, including the #1 New York Times bestseller I Want My Hat Back , the Caldecott Medal and Kate Greenaway Medal winner This Is Not My Hat , and the forthcoming conclusion We Found a Hat , due out October 11, 2016. He is also the illustrator of two Caldecott Honor books, Extra Yarn and Sam and Dave Dig a Hole , both written by Mac Barnett, as well as the New York Times Best Illustrated Book of the Year   House Held Up by Trees , written by Ted Kooser. Originally from Niagara Falls, Ontario, Jon Klassen now lives in Los Angeles.

ABOUT CANDLEWICK PRESS Candlewick Press is an independent publisher based in Somerville, Massachusetts. For over twenty years, Candlewick has published outstanding children’s books for readers of all ages, including books by award-winning authors and illustrators such as the National Ambassador for Young People’s Literature emeritus Kate DiCamillo, M. T. Anderson, Jon Klassen, and Laura Amy Schlitz; the widely acclaimed Judy Moody, Mercy Watson, and ’Ology series; and favorites such as  Guess How Much I Love You ,  Where’s Waldo? , and Maisy. Candlewick is part of the Walker Books Group, together with Walker Books U.K. in London and Walker Books Australia. The Walker Books Group has a unique ownership structure that includes all of its employees worldwide. Visit Candlewick online at  www.candlewick.com.