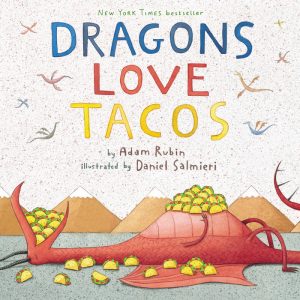 In Dragons Love Tacos Robbie learns a valuable lesson about what happens when you accidentally give dragons some tacos with spicy smooth salsa (hint, lots of fire and burnt houses!).  In Dragons Love Tacos 2: The Sequel, something devastating has occurred—all the tacos have been eaten. Rather than living in a taco-less universe, Robbie and his trusty dog decide to fire up their time machine in the garage so they can travel back in time when tacos weren’t extinct. The result is a gut-bustlingly hilarious adventure.

Executive Editor Kate Harrison is thrilled to be releasing this companion: “Everyone probably thinks that these dragons have just been partying and bingeing on tacos since the publication of the first book, so I’m excited to publish a sequel in which the truth will finally come out. I know every taco lover out there will share my gratitude for these dragons’ valiant, extraordinary efforts to save us from a world without tacos.”

“After the success of the first book, I struggled with ideas for a worthy follow up,” says author Adam Rubin. “Failed attempts include: ‘Ogres Love Ice Cream’, ‘Dragons Love Nachos’, ‘Dragons Love Tacos: In Space’, ‘Dragons Love Christmas’, and ‘Dragons Make Tacos: an illustrated guide to Mexican Cuisine’. Finally, I asked myself, ‘What would happen if the world ran out of tacos?’ The answer is: I would finally write a sequel that I really like.”

Illustrator Daniel Salmieri adds, “After four years, I was worried I had forgotten how to paint tacos, but it turns out it’s just like riding two thousand tiny bicycles.”

This October, Dial Books for Young Readers will release a special book and toy set, which includes a smaller on-the-go trim-sized copy of Dragons Love Tacos and an adorable dragon plush.  Children’s clothing including t-shirts, shorts and other merchandise featuring Salmieri’s artwork is also available at Target department stores nationwide.

Adam Rubin is the New York Times best-selling author of a half dozen critically-acclaimed picture books including Robo-Sauce, and Secret Pizza Party. He spent ten years working as a creative director in the advertising industry before leaving his day job to write full time. Adam has a keen interest in improv comedy, camping and magic tricks. He lives in New York City.

Daniel Salmieri has illustrated many fantastic picture books and his work has been recognized by the Society of Illustrators and American Illustration. He grew up in Brooklyn, constantly drawing and painting images of ninja turtles, dinosaurs, and fighter jets (not in the same scene…), and graduated from the University of the Arts in Philadelphia. He lives with his wife in Brooklyn, New York.