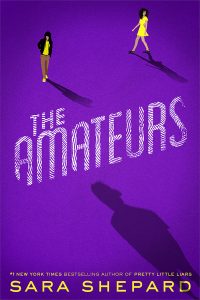 Los Angeles, CA — Disney Publishing Worldwide (DPW) announced today the release ofthe first book in a new series by the New York Times best-selling author of the Pretty Little Liars series, Sara Shepard.The Amateurs, on sale November 1, 2016, is packed with the twists and turns, steamy romance, and stunning revelations that Sara’s fans have been waiting for. The Amateurs is the first book from DPW’s new Freeform imprint, which was created to coincide with ABC Family’s rename and rebrand to Freeform in January 2016. The new Freeform imprint will focus on young adult and crossover fiction aimed at 14– to 34–year-olds, and it will be dedicated to creating new book properties as well as co-developing content that could span formats from books to television and supporting existing programming on Freeform.

The Amateurs begins five years after high school senior Helena Kelly disappeared from her backyard in Dexby, Connecticut, never to be heard from again. Her family was left without answers—without any idea who killed Helena, or why. Now, eighteen-year-old Seneca Frazier wants to change that. After connecting with Maddy Wright, his friend Brett, and Helena’s sister, Aerin Kelly, on a message board dedicated to solving cold cases, Seneca just might succeed where the police have failed. But Seneca is hiding some dark secrets of her own—secrets that could get in the way of the investigation. And somewhere nearby, the killer is watching . . . ready to do whatever it takes to make sure the truth stays buried.

Print and eBook formats of The Amateurs are available for pre-order wherever books are sold.

Sara Shepard is the author of two New York Times best-selling series, Pretty Little Liars and The Lying Game, as well as the series The Perfectionists. She graduated from NYU and has an MFA from Brooklyn College. Visit her online at @sarabooks on Twitter and Snapchat, and @saracshepard on Instagram.

Disney Publishing Worldwide (DPW) is the world’s largest publisher of children’s books, magazines, and apps, igniting imagination through storytelling in ever-inventive ways. DPW creates and publishes books and magazines both vertically in-house and through an extensive worldwide licensing structure. As a leader in digital products, DPW creates best-selling eBook titles and best-in-class original apps. DPW is also committed to the educational development of children around the world through Disney Learning, which includes Disney Imagicademy, as well as Disney English and other Disney-themed learning products. Headquartered in Glendale, California, DPW publishes books, magazines, and digital products in 68 countries in more than 50 languages. For more information, visit www.disneypublishing.com.

Part of the Disney|ABC Television Group, Freeform is distributed in 94 million homes. The network connects to audiences and goes beyond entertainment with bold innovative programming and immersive social engagement. The network delivers a unique mix of quality original and acquired series, plus fan favorite movies and the holiday events “13 Nights of Halloween” and “25 Days of Christmas.” The Freeform app is a service that allows viewers with participating TV subscription services access to 24/7 live viewing of the network, as well as continued on-demand access via a wide array of devices.

A Top 5 cable-TV series since launch, Pretty Little Liars continues to dominate across numerous social media stages, ranking #1 across multiple platforms: #1 scripted TV show with over 141 million Total Engagementsacross Facebook, Instagram, Tumblr, and Twitter; #1 scripted TV series on Instagram with 5 million Total Fans and 100 million Engagements, towering over #2 The Walking Dead by +82%; #1 scripted show on Pinterest. In addition, the series still holds one of the Top 6 most tweeted scripted telecasts in cable TV history, is one of Snapchat’s fastest-growing TV brands with over 1.6 million friends, and has over 14 million Facebook friends.