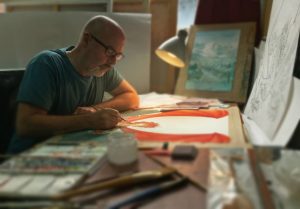 On Tuesday 17th May, 2016, author and illustrator PJ Lynch was announced as the fourth Laureate na nÓg, Ireland’s laureate for children’s literature, at a special event at the Arts Council’s offices in Merrion Square. The announcement was made by President Michael D. Higgins.

Laureate na nÓg is an initiative of the Arts Council with the support of Arts Council of Northern Ireland, the Department of Children and Youth Affairs, Children’s Books Ireland and Poetry Ireland. The honour was established to engage young people with high quality children’s literature and to underline the importance of children’s literature in our cultural and imaginative lives.

PJ Lynch was born in Belfast and became interested in art at an early age. He has worked as a children’s picturebook illustrator since leaving Brighton College of Art in England in 1984 and has illustrated over twenty books, including modern editions of classics such as Charles Dickens’s A Christmas Carol and The Snow Queen by Hans Christian Andersen.

PJ has been awarded the Christopher Medal three times and he also won the prestigious Kate Greenaway Medal on two occasions, first for The Christmas Miracle of Jonathan Toomey by Susan Wojciechowski and again for When Jessie Came Across the Sea by Amy Hest. Lynch’s first illustrated book was A Bag of Moonshine by Alan Garner, a collection of folklore tales from England and Wales, which was published in 1986 and which won the Mother Goose Award, given to the most exciting newcomer to British children’s book illustration. Since then, folklore – traditional stories, legends, and fairy tales – have been a recurring subject of his work. Recent titles he has illustrated include Mysterious Traveller, Once upon a Place, which was complied by previous Laureate na nÓg Eoin Colfer and The Boy who Fell off the Mayflower, which is the first book he has also written. It was shortlisted for numerous awards. In 2017, Patrick and the President, his collaboration with Ryan Tubridy about John F. Kennedy’s visit to Ireland, will be published.

Speaking about his appointment as Laureate na nÓg, PJ Lynch said: ‘Being named the new Laureate is one of the proudest moments of my career. I want to explore the magic that happens when words and pictures come together. My theme as Laureate na nÓg will be “The Big Picture” – I plan to do a regular podcast involving live drawing or demonstrating techniques and I’ll invite guests to talk about their drawing passions. I would also love to create a landmark image in a prominent place or places in Ireland as a permanent reminder of the power of pictures to incite the imagination.’

Sheila Pratschke, Chair of the Arts Council, said: ‘When the Arts Council established this honour in 2010, we could not have anticipated the enormous extent of Laureate na nÓg’s reach or the incredible depth of its impact. From Siobhán Parkinson’s Laureate International Library to Niamh Sharkey’s Pictiúr to Eoin Colfer’s Once upon a Place – each Laureate has left a meaningful creative legacy and inspired a new generation of readers, writers and illustrators.’ She continued: ‘We are so honoured that the esteemed author and illustrator PJ Lynch is our fourth Laureate na nÓg. An extraordinarily gifted and revered picturebook maker, PJ Lynch has already touched the lives of so many young people and their families. We are excited to bring his work and his passion to even more people through this initiative.’

Bob Collins, Chair, Arts Council of Northern Ireland, said: ‘Laureate na nÓg is an excellent vehicle for advocating the importance of children’s literature and the vibrancy of children’s imagination.  Our young people are the next generation of artists that will give voices to lives lived on this island and beyond, so let us inspire them and fire their creativity with the help of our leading writers and illustrators. The announcement of PJ Lynch as Laureate na nÓg is an  inspired choice for the fourth all-island Children’s Laureate and the Arts Council of Northern Ireland is delighted to support this award together with our colleagues in An Chomhairle Ealaíon.’

Jenny Murray, Acting Director of Children’s Books Ireland said: ‘We are delighted to welcome PJ as Ireland’s fourth Laureate na nÓg. He represents the very best in Irish picturebooks both at home and abroad and stands behind an extraordinary body of work, which has been recognised and awarded at the highest level. We have known and worked with PJ for many years and very much look forward to what the Laureate na nÓg project will bring. It is a richly deserved honour.’

The role of Laureate na nÓg was established in 2010 to recognise the role and importance of literature for children.  The position is held for a period of two years, during which the Laureate will reach a wide and diverse audience throughout Ireland and internationally through selected events and initiatives.

The title of Laureate na nÓg acknowledges Irish writers or illustrators with internationally recognised bodies of high quality children’s writing and/or illustration.  The recipients will also have made particularly significant contributions to the field of children’s literature in Ireland, having had a considerably positive impact on readers as well as other writers and illustrators.