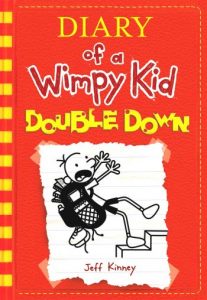 NEW YORK, NY — Amulet Books, an imprint of ABRAMS, revealed the cover, title, and color of the biggest book of 2016 today. Jeff Kinney’s eleventh original book in the Diary of a Wimpy Kid series, Diary of a Wimpy Kid: Double Down, goes on sale 11/1/16. He joined an exuberant crowd of fans in New York City during a live webcast in partnership with Scholastic Reading Club. Over 1 million viewers worldwide tuned in for the unveiling, which is now available to watch on the Wimpy Kid YouTube channel. The book’s November 1 global on-sale in at least 20 countries around the world will mark a milestone for a series that has topped bestseller lists globally for more than nine years. The intense red cover features bold yellow striping and a special cheese font that highlights a popular element from the books.

“Greg Heffley has always believed there was something that set him apart from everyone else. In the new book, Greg discovers what makes him unique, and it’s not at all what he expected,” says Jeff Kinney. “After the tenth book, I found myself at a crossroads in my career. I wasn’t sure if I should continue writing Diary of a Wimpy Kid books or go down a different path. Double Down is really special to me, because it reflects a renewed commitment to the series and a plan for the future.”

An all-new original story by bestselling author Jeff Kinney, Diary of a Wimpy Kid: Double Down is one of the most anticipated books of the year everywhere; tens of millions of fans eagerly await this newest volume. There are now more than 165 million copies of the books in the Diary of a Wimpy Kid series in print globally.

“We are as excited about Diary of a Wimpy Kid: Double Down as we were when we published the first ten books. There is no stopping Jeff’s enthusiasm and storytelling flair along with his artistic creativity. We look forward with even more enthusiasm to the tenth anniversary of the series in 2017,” says Michael Jacobs, president and CEO of ABRAMS. “This unprecedented global release promises to be the biggest book and book event of the year around the world. Diary of a Wimpy Kid continues to turn millions of kids on to reading everywhere.”

Today’s reveal wraps up the third annual Wimpy Kid Month, which began on April 1 with a multifaceted campaign that included national publicity and advertising, dedicated retail promotions, and much more. Special appearances by Jeff Kinney included a presentation to over a thousand librarians at the Texas Library Association conference in Houston, Texas. He also attended the debut of Diary of a Wimpy Kid: The Musical, the first-ever theatrical interpretation of the books. It opened to rave reviews in mid-April and has already been extended for an additional eight weeks through the end of June. Materials for teachers and librarians offered activities for curriculum that incorporated Diary of a Wimpy Kid and encouraged readers to exchange ideas and favorite moments.

Diary of a Wimpy Kid: Double Down, originating from ABRAMS’ Amulet imprint, will go on sale for publishing houses in the United States, the United Kingdom, Canada, Germany, Australia, Turkey, Greece, Japan, Brazil, Spain, Catalonia, Romania, Portugal, Hungary, Sweden, Latvia, Norway, and Taiwan, which joined forces for the first time for the simultaneous release of book 10. Israel and Korea have joined as new partners for the release of book 11. More publishing partners are expected to be announced soon.

This new book follows the enormous international acclaim of book 10, Diary of a Wimpy Kid: Old School, which debuted at the top of bestseller lists around the world and has remained a number one bestseller since it was published on November 3, 2015. Diary of a Wimpy Kid: Old School was one of the top-ranked titles—children’s or adult—of the year, and continues to dominate sales charts in 2016.

Kinney will continue his global tour throughout 2016 to build excitement for book 11. His international travels for book 10, Diary of a Wimpy Kid: Old School, brought laughter and literacy around the world as Kinney began an unprecedented worldwide tour to meet and greet international readers. Working closely with publishers on five continents, Kinney was featured in major media outlets, met thousands of fans at sold-out events, and experienced local cultures.

Three movies based on the book series have grossed more than $250 million. Jeff Kinney has won six Nickelodeon Kids Choice Awards and two Children’s Choice Book Awards. Books in the series have won numerous awards that were voted on by students and teachers around the globe. Wimpy Wonderland Island on poptropica.com, a virtual world for kids, remains one of the most visited pages on the popular website.

Kinney’s work has been widely praised for its ability to turn reluctant readers on to books. Published in 2007, the first Diary of a Wimpy Kid book was an instant bestseller, and just a year later, more than 100,000 copies were in print in the United States alone. The Diary of a Wimpy Kid series is a fixture on the USA Today, Wall Street Journal, Publishers Weekly, and IndieBound bestseller lists. It has remained on the New York Times bestseller list since the publication of the first book and through the release of book 10 for more than 466 weeks total, and for more than 362 on the series list. Wimpy Kid has been sold in more than 53 editions in 49 languages and appears on bestseller lists around the world. There are now more than 165 million books in the series in print around the globe.

FOUNDED BY HARRY N. ABRAMS IN 1949, ABRAMS IS THE PREEMINENT PUBLISHER OF HIGH QUALITY ART AND ILLUSTRATED BOOKS. NOW A SUBSIDIARY OF LA MARTINIÈRE GROUPE, ABRAMS IS THE PUBLISHER OF BESTSELLERS SUCH AS THE WILDLY POPULAR THE DIARY OF A WIMPY KIDSERIES BY JEFF KINNEY, THE AWARD-WINNING COOKBOOKS OF ALTON BROWN, AND THE STUNNING PHOTOGRAPHY OF YANN ARTHUS-BERTRAND’SEARTH FROM ABOVE. ABRAMS PUBLISHES BOOKS IN THE AREAS OF ART, PHOTOGRAPHY, COOKING, INTERIOR DESIGN, COMICS, CRAFT, FASHION, SPORTS, POP CULTURE, AS WELL AS CHILDREN’S BOOKS AND GENERAL INTEREST. THE COMPANY’S IMPRINTS INCLUDE ABRAMS; ABRAMS APPLESEED; ABRAMS COMICARTS; ABRAMS IMAGE; ABRAMS NOTERIE; ABRAMS BOOKS FOR YOUNG READERS; AND AMULET BOOKS.