Ransom Riggs, #1 New York Times Bestselling Author of the Miss Peregrine Series, to Publish Tales of the Peculiar On ‘Loop Day’ in September 2016 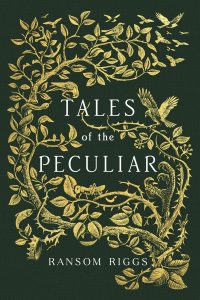 New York, NY — On September 3, 2016 Penguin Young Readers will celebrate “Loop Day” nationwide with the Saturday publication of TALES OF THE PECULIAR,  an illustrated collection of fairy tales set within the world of the Miss Peregrine series. The all-new work will include ten stories by Ransom Riggs with art by Andrew Davidson. Arriving mere weeks before the Tim Burton helmed movie adaptation hits theatres on September 30, 2016, TALES OF THE PECULIAR will have a first print run of 1,000,000 copies.

September 3 is known to the legions of fans of Ransom Riggs’s #1 bestselling Miss Peregrine series as ‘Loop Day.’ In the story, Miss Peregrine’s home is located in a September 3, 1940 time loop. Every day, the clocks reset just before the peculiars’ island home is bombed by German forces, keeping them forever safe from catastrophe.

A beloved part of the Miss Peregrine series mythology, TALES OF THE PECULIAR is an illustrated collection of the fairy tales that guard secrets of the peculiar world. In this deluxe volume, Ransom Riggs has crafted a brilliant collection of original stories that reveal the origins and early history of the peculiar world, including the story of the very first ymbryne. The stories have been framed with an introduction and commentary by Millard Nullings, a popular character from the series who is a ward of Miss Peregrine’s and scholar of all things peculiar.

The beautiful cover was designed by Andrew Davidson, who has created images for classics such as The Iron Giant and the adult editions of Harry Potter. The book will have gold foil detail to bring Davidson’s exquisite wood-engraving to life. Each of the ten tales within the collection will also have a full-page illustration by Davidson.

“It’s such a treat to release this book on Loop Day,” said Ransom Riggs, “and so appropriate, since both Loop Day and the Tales themselves are elements of the peculiar world which, prior to now, existed only within my novels. I’m not sure anyone’s ever published a fictional fiction book on a fictional holiday — though the moment it happens, both book and holiday graduate into the real world. I’m excited, too — beyond words — that the book has been illustrated by the masterful hand of Andrew Davidson. I always envisioned Tales as a book illustrated with engravings, not photography, and from the very beginning of the project, Andrew topped my list of dream illustrators. I’m so grateful he said yes, and for the inspired and unbelievably detailed work he’s done. His images elevate the stories to another level.”

Andrew Davidson said, “It’s a privilege to work with Ransom’s extraordinary stories. As an illustrator it’s a wonderful challenge to keep up with his imagination.”

Published to wide acclaim in 2011, Miss Peregrine’s Home for Peculiar Children hit number one on The New York Times bestseller list, where it has spent more than 100 weeks. Amazon named it one of “100 Young Adult Books to Read in a Lifetime,” and the series has sold over 5 million copies and been translated into over 40 languages. Tim Burton is currently in production on a Miss Peregrine’s Home for Peculiar Children movie for 20th Century Fox. Written by Jane Goldman (Kingsman: The Secret Service, X-Men: First Class), it stars Samuel L. Jackson, Eva Green (as the title character), Asa Butterfield, Ella Purnell, Judi Dench, Rupert Everett, Allison Janney, and more.

Prior to writing his first novel, Riggs published a tongue-in-cheek guide to life as a professional detective (The Sherlock Holmes Handbook, Quirk Books) and a coffee-table collection of found snapshots with surprising messages written on them (Talking Pictures, Harper Collins). Before that he worked as a writer for Mental Floss’ magazine and blog, which explains his love of obscure trivia. Riggs was born on a farm in Maryland and grew up in southern Florida. He studied literature at Kenyon College and film at the University of Southern California. His hobbies include urban exploration, wreck diving, collecting vintage found photography, and making short films. He lives in Los Angeles with his wife Tahereh Mafi, bestselling author of the Shatter Me novels and the upcoming Furthermore, due from Penguin-Random House in 2016.

Andrew Davidson graduated from the Royal College of Art with a Masters in Graphic Design. Davidson has worked as an Illustrator in a number of different disciplines, but craft and design have always been the cornerstones of his work. His wood engraved illustrations have been featured in landmark publications including a stunning adult edition of the Harry Potter series in the UK and The Iron Giantby Ted Hughes. He has also created a set of over fifty pub signs in vitreous enamel for John Smiths Brewery,  worked with The Royal Mail on over twelve sets of stamps, and designed the glass etched doors for the Centre Court at Wimbledon  He is married to his wife Julia, and have two sons Lewis and Hugh.

Dutton Books For Young Readers is one of the oldest continually operating children’s book publishers in the United States. Established more than 150 years ago, the imprint is home to such perennial classics as Winnie the Pooh, Judy Blume’s Fudge novels, Newbery Award-winners such as The Westing Game and My Side of the Mountain, and Printz winners and honor books including Looking for Alaska by John Green. Recent bestsellers include The Fault in Our Stars by John Green, Matched by Ally Condie, and the Theodore Boone series by John Grisham.