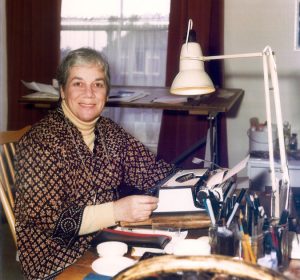 The daughter of a naval officer, Fortnum joined the Auxiliary Territorial Service during World War Two. After suffering an injury in the line of duty, she enrolled in the Central School of Arts and Crafts in London.

Fortnum went on to win the hearts of critics and readers with her artwork. She’s best remembered for her illustrations of the lovable Paddington bear.

He had to look real…People who saw him had to believe in him, just as they believe in Winnie-the-Pooh…You see, I don’t like whimsy or sentiment. This bear had character. I felt a real rapport with this brainless innocent who always came out on top. (The New York Times)