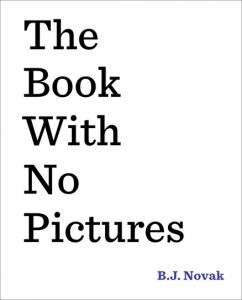 New York, NY – B.J. Novak, actor and #1 New York Times bestselling author of The Book With No Pictures, will donate 5,000 copies of his acclaimed children’s book to First Book, a nonprofit social enterprise that provides new books, educational resources and other essentials needed to help kids learn. Novak’s publisher, Penguin Young Readers, will match the donation with an additional 5,000 copies of the book. Through its community of over 235,000 educators and program leaders nationwide, First Book will ensure the 10,000 donated books reach the hands of children from low-income families.

To mark the donation, B.J. Novak will visit 52nd Street School in Los Angeles on April 7th for a reading of his #1 New York Times bestselling children’s book, The Book With No Pictures. Each participating student will receive a complimentary copy of the book to take home.

“The most moving thing to me about The Book With No Pictures is seeing kids of all backgrounds responding identically to the power of the written word,” said B.J. Novak. “ Laughter is universal, and literacy should be too.”

“Delightful books like B.J. Novak’s spark a lifelong love of reading in so many kids,” said Kyle Zimmer, president and CEO of First Book. “We’re grateful to B.J. and Penguin Young Readers for making it possible to share 10,000 copies of The Book With No Pictures with young readers who need them most.”

About The Book With No Pictures by B.J. Novak
This “funny, creative, and smart” (Vanityfair.com),“riotously fresh take on breaking the fourth wall” (Kirkus Reviews) turns the notion of the picture book on its head, by delivering a text-only story book for young children. Designed to make any reader into an extraordinary storyteller, this innovative and wildly funny read-aloud plays off the idea that everything written on the page has to be said by the person reading it aloud, even if the words say “BLORK” or “BLURFF”.

B.J. Novak is perhaps best known for his work on NBC’s Emmy Award-winning comedy series The Office as an actor, and executive producer. He is also known for his work as a standup comedian and his performances in films such as Quentin Tarantino’s Inglourious Basterds and Disney’s Saving Mr. Banks. He will next appear in The Founder alongside Michael Keaton.  Novak’s debut collection of short stories, One More Thing: Stories and Other Stories, was an immediate New York Times Best Seller and received rave reviews. His children’s book, The Book With No Pictures, is a #1 New York Times Best Seller with over a million copies in print and is currently sold on international bookshelves in 24 additional languages. Novak’s stories have been published in The New Yorker and featured on This American Life.  He is also the co-founder of The List App, which launched in October 2015 and can be found at http://li.st.

First Book is a nonprofit social enterprise that has distributed more than 140 million books and educational resources to programs and schools serving children from low-income families throughout the United States and Canada. By making new, high-quality books and educational resources available on an ongoing basis, First Book is transforming the lives of children in need and elevating the quality of education. For more information, please visit firstbook.org or follow the latest news on Facebook and Twitter.