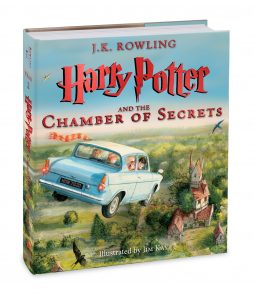 New York, NY – Scholastic (NASDAQ: SCHL), the global children’s publishing, education and media company, today for the first time released the cover image of the fully illustrated edition of J.K. Rowling’s bestselling Harry Potter and the Chamber of Secrets. Illustrated by award-winning artist, Jim Kay, the cover shows Harry Potter flying towards The Burrow in the Ford Anglia and is available for download at http://mediaroom.scholastic.com/harrypotter. Bloomsbury UK also revealed the image simultaneously.

The illustrated hardcover edition of Harry Potter and the Chamber of Secrets will be published globally on October 4, 2016 and will include over 115 color images. More than 450 million copies of the Harry Potter books have sold worldwide with over 160 million copies in the U.S. alone.

Harry Potter and the Sorcerer’s Stone Illustrated Edition was published globally in October 2015 and sent the Harry Potter series back to number one on The New York Times bestseller list. The book also appeared on both the USA Today and Wall Street Journal bestseller lists. There are currently more than 650,000 copies in print of the Harry Potter and the Sorcerer’s Stone Illustrated Edition in the U.S. Jim Kay’s artwork received acclaim across the globe and J.K. Rowling herself said, “Seeing Jim Kay’s illustrations moved me profoundly. I love his interpretation of Harry Potter’s world, and feel honoured and grateful that he has lent his talents to it.”

Pottermore, the digital heart of J.K. Rowling’s Wizarding World, will exclusively reveal extra artwork from Harry Potter and the Chamber of Secrets Illustrated Edition at 10:00 a.m. on Wednesday March 30, 2016. Head to www.pottermore.com to see more of Jim Kay’s beautiful images.

About Jim Kay
Jim Kay won the Kate Greenaway Medal in 2012 for his illustrations in A Monster Calls by Patrick Ness. He studied illustration at the University of Westminster, and worked in the Library & Archives of Tate Britain and the Royal Botanic Gardens at Kew. Jim has produced concept work for film and television, and contributed to the group exhibition Memory Palace at the V&A museum in London. He lives and works in Northamptonshire with his partner.

About Scholastic
Scholastic Corporation (NASDAQ: SCHL) is the world’s largest publisher and distributor of children’s books, a leading provider of print and digital instructional materials for pre-K to grade 12, and a producer of educational and entertaining children’s media. The Company creates quality books and ebooks, print and technology-based learning materials and programs, classroom magazines and other products that, in combination, offer schools customized solutions to support children’s learning both at school and at home. The Company also makes quality, affordable books available to all children through school-based book clubs and book fairs. With a 95 year history of service to schools and families, Scholastic continues to carry out its commitment to “Open a World of Possible” for all children. Learn more atwww.scholastic.com.