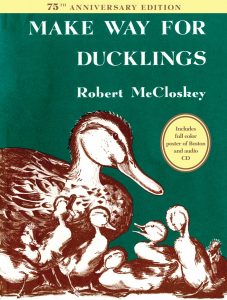 Seventy five years ago, a family of ducks waddled off the page and into the hearts of readers everywhere in Robert McCloskey’s Caldecott Medal winning MAKE WAY FOR DUCKLINGS (9781101997956; Viking Books for Young Readers; Hardcover; $24.99; Ages 3 – 7; March 29, 2016). In this collectable slipcase edition, MAKE WAY FOR DUCKLINGS fans can follow the journey of their favorite ducklings with a specially designed poster map of Boston illustrated by Caldecott Award winner Paul O. Zelinsky, and can also listen to the included audio CD recording.

MAKE WAY FOR DUCKLINGS was originally published in 1941 when America was in the tail-end of the Great Depression. Robert McCloskey, an artist who had already successfully published his first book Lentil, was interested in stories that drew upon everlasting American values like family unity and perseverance. Making decisions for the benefit of your children, and being able to do it without the assistance of a partner, is a relatable experience for every new parent. It has been argued that Mrs. Mallard’s single-parented act of getting her children safely across a dangerous road makes her one of the first feminist children’s book characters.

In MAKE WAY FOR DUCKLINGS Mrs. Mallard and her ducklings set off on their journey to reunite with Mr. Mallard in Boston Public Garden, but her loud quacking was no match for the noisy city traffic. With the help of a friendly policeman and several amused Bostonians, the ducklings successfully waddle across crowded streets in a perfect line to reach a new little island in the park. Ever since, thousands of stories of instances where people have ‘made way for ducklings’ have been reported in the media, and continue to delight amused onlookers everywhere. MAKE WAY FOR DUCKLINGS is the official children’s book of Massachusetts. Today families can gather around the now famous Make Way For Ducklings statue designed by Nancy Schon in the Public Garden, which is touched so often that it never needs to be polished.

Robert McCloskey’s tale was inspired by studying and sketching live baby ducklings in his New York apartment, and studying art in Boston. McCloskey’s editor, the illustrious May Massee, pushed him to break the rules at a time when children’s literature was in the early stages of formal recognition. He chose sepia over traditional black-and-white sketches because it gave off a warmer effect. His aerial views of Boston reflected a perspective that many people had never experienced before modern air travel. But his beloved little furry ducklings stole the show on every page. McCloskey won the Caldecott Medal in 1942 and again in 1958 for Time of Wonder, making him the first illustrator to be given the award twice.

Ken Wright, Vice President and Publisher of Viking Books for Young Readers, says “We are thrilled at Viking to be celebrating 75 years of Robert McCloskey’s beloved classic. It’s hugely gratifying as a publisher to be able to continue to bring Make Way for Ducklings to new generations of readers.”

Regina Hayes, Editor at Large, remembers McCloskey fondly as, “a gentle, self-deprecating man, rather shy, but with a wonderful, sly sense of humor. I was with him on several occasions when he met the public, and he was always taken aback and almost overwhelmed by the great affection of his readers.”

In partnership with Friends of the Boston Public Garden, each year the people of Boston come together to celebrate this classic story by recreating the Mallard family’s journey for Duckling Day. McCloskey’s daughter, Sal McCloskey will lead the parade along with other prominent members of Boston. The Eric Carle Museum will also house over 90 original artworks in their exhibition “Americana on Parade: The Life of Robert McCloskey” from June 19th until October 23rd.

ROBERT MCCLOSKEY (1914-2003) wrote and illustrated some of the most honored and enduring children’s books ever published. He grew up in Hamilton, Ohio, and spent time in Boston, New York, and ultimately Maine, where he and his wife raised their two daughters. The first ever two-time Caldecott Medal winner, for Make Way for Ducklings and Time of Wonder, McCloskey was also awarded Caldecott Honors for Blueberries for Sal, One Morning in Maine, and Journey Cake, Ho! by Ruth Sawyer.  He was declared a Living Legend by the Library of Congress in 2000.  You can see some of his best-loved characters immortalized as statues in Boston’s Public Garden and Lentil Park in Hamilton, Ohio.

PAUL O. ZELINSKY was born in Evanston, Illinois. He attended Yale University, where he took a course with Maurice Sendak, which later inspired him to pursue a career in children’s books. He is illustrator of over thirty books for children. Among many other awards and prizes, he received the 1998 Caldecott Medal for his illustrated retelling of Rapunzel, as well as three Caldecott Honors.Most recently his illustrated retelling of The Wheels on the Bus has celebrated its 25th anniversary in 2015. Paul O. Zelinsky lives in New York with his wife, Deborah, and the younger of their two daughters.