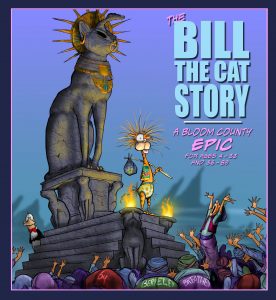 New York, NY — Philomel Books, an imprint of Penguin Young Readers, has acquired THE BILL THE CAT STORY: A BLOOM COUNTY EPIC, the first and only picture book featuring the origin story of fan-favorite Bill the Cat from Bloom County, the comic strip that earned Berkeley Breathed a Pulitzer Prize in 1987. The deal was negotiated by Michael Green, President and Publisher of Philomel Books, who will also edit the book, for world rights; the book will be released on September 13, 2016.

THE BILL THE CAT STORY: A BLOOM COUNTY EPIC will be illustrated and presented as a deluxe edition of the legendary comic strip, which made national headlines after returning from a twenty-five year hiatus in July of 2015. The strip is published exclusively on Breathed’s Facebook page, and in mere months has amassed over half a million followers, a testimony to Bloom County’s lasting and dedicated fanbase. This new picture book from Breathed will serve as a funny, kid-friendly introduction to Bloom County, while offering adult fans the chance to learn the backstory of one of its most beloved characters.

“I thought it time that the gentle, cuddly watercolor world of children’s literature discover that a quasi-comatose cat’s life story is sweetly touching,” said Breathed. “If you look past the hair plugs, the brain issues, the alien abduction, the elephant stampeding and the religious cult, he’s just Winnie the Pooh but orangier.”

Michael Green said, “It has been my honor to edit Berkeley Breathed’s original works of fiction over the past decade, yet that honor feels tenfold to be entrusted with such an iconic element of American pop culture. Bloom County is as funny and fresh today as it was twenty-five years ago because Berkeley’s originality and humor are unyielding.”

Berkeley Breathed (www.berkeleybreathed.com) is the Pulitzer Prize-winning creator of the renowned comic strips “Bloom County,” “Outland,” and “Opus” which have appeared in over 1,200 newspapers worldwide and have earned Berkeley millions of loyal fans. He is also the creator of the illustrated novel Flawed Dogs and the New York Times bestselling picture booksMars Needs Moms!, which was developed into a feature film by Disney, and Pete & Pickles. He lives and works in Santa Barbara, California.