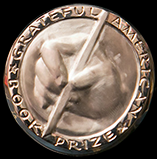 Authors and publishers may submit works of fiction and non-fiction

WASHINGTON, DC – The Grateful American Book Prize is accepting submissions for its 2016 award.

The Prize was created last year and received nearly 150 entries as authors and publishers vied for top honors in the first of its kind competition for historically accurate books of fiction and non-fiction for young readers focused on the events and personalities that have shaped the United States.

The 2015 winner was Kathy Cannon Wiechman for Like a River: A Civil War Novel published by Calkins Creek, an imprint of Highlights Press.  Although Like a River is her first published novel, Wiechman is a prolific writer with a total of 11 completed novels, dozens of short stories and hundreds of poems.  She has a second novel, Empty Places, scheduled for publication in 2016.  It is aimed at young readers nine years of age and up.

“It’s a different time period from Like a River, but both books are about surviving difficult circumstances.  In addition to learning more about the Great Depression, a reader can see life in an impoverished, rural setting that might be very different from their own experience,” according to Wiechman.

Author and publisher David Bruce Smith and Dr. Bruce Cole, the former Chairman of the National Endowment for the Humanities are co-founders of the award.  Their purpose was to encourage authors and publishers to produce “good, readable books about American history.”

The Prize comes with a cash award of $13,000 representing the original 13 colonies.  In addition, the winner receives a medal created for the occasion by Mr. Smith’s mother, the noted artist Clarice Smith.

In addition to Cole and Smith, the 2016 Panel of Judges for the Prize includes Dr. Louise Mirrer, President and CEO, New-York Historical Society; Dr. Peter S. Carmichael, Robert C. Fluhrer Professor of Civil War Studies & Director of the Civil War Institute at Gettysburg College; John Gray, the Elizabeth MacMillan Director of the Smithsonian’s National Museum of American History; Neme Alperstein, a teacher of Gifted and Talented Students in the New York City Public School system since 1987; Dr. Douglas Bradburn, author, historian and Founding Director of the Fred W. Smith National Library for the Study of George Washington at Mount Vernon; and John Danielson, Chairman of the Board of Directors at Education Management Corporation.

EDITORS NOTE: The Prize will be awarded to the authors of books for children in grades seven through nine about important moments and people in America’s history.  They can be works of fiction or non-fiction and may include illustrations to enhance the author’s words.  We are looking for excellence in writing, storytelling and illustration.