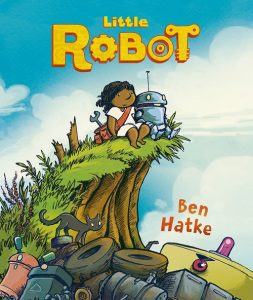 Champaign, IL — Little Robot, written and illustrated by Ben Hatke, and published by First Second Books, is the winner of the 2016 Gryphon Award for Children’s Literature.

The prize is awarded to the author of an outstanding English language work of fiction or nonfiction for which the primary audience is children in kindergarten through fourth grade, and which best exemplifies those qualities that successfully bridge the gap in difficulty between books for reading aloud to children and books for practiced readers. With a core of regular committee members, the award has become a way to contribute to an ongoing conversation about literature for inexperienced readers and to draw attention to the literature that offers, in many different ways, originality, accessibility, and high quality for that audience.

“Hatke’s graphic novel is both cleverly crafted and utterly irresistible,” said Stevenson. “Our young heroine is an admirable adventurer and capable wielder of a tool belt, and the little robot she finds, repairs, and befriends is an endearing pet/sidekick. The balance between wordless sequences and simple speech-balloon dialogue (plus the robot’s sound effects) will reassure tentative readers and encourage them to decode narrative from both visual and textual clues.”

The Gryphon Award was established in 2004 as a way to focus attention on transitional reading. “These are some of the most important books children will ever read,” Stevenson said. “We love having the opportunity, as a committee, to draw attention to the many wonderful books available to encourage early readers to move beyond the practical challenge of decoding to the skill of reading for content and for pleasure.”

The award committee consists of members drawn from the youth services faculty of GSLIS, the editorial staff of The Bulletin of the Center for Children’s Books, public and school librarians, and the library and education community at large.

The award is sponsored by the CCB and funded by the CCB’s Gryphon Fund. Income from the fund supports the annual Gryphon Lecture as well as the Gryphon Award for children’s literature.