Fairytales Dated Back to Prehistoric Times 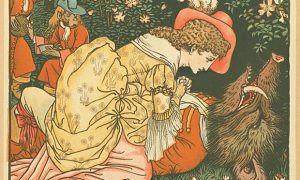 Using phylogenetic analysis — a technique used in evolutionary biology —researchers believe that some folk tales predate classical writing, and were most likely told in an extinct Indo-European language.

Ultimately, despite being often disregarded as fictitious, and even as a lesser form of narrative, folk tales are excellent case studies for cross-cultural comparisons and studies on human behaviour, including cooperation, decision making, [and so on]. (The Guardian)