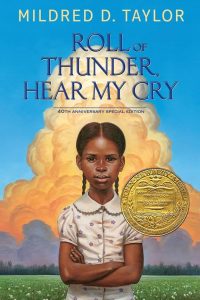 New York, NY — Penguin Young Readers is pleased to announce a writing contest in partnership with We Need Diverse Books™ to honor the 40th anniversary of Mildred D. Taylor’s award winning Roll of Thunder, Hear My Cry. Ms. Taylor’s writing, first discovered in 1974 through a contest sponsored by the Council of Interracial Books, will now inspire a new generation of authors from diverse backgrounds.

In 1974, the Council on Interracial Books sponsored a writing contest seeking out diverse voices. Mildred D. Taylor was the winner of the African-American segment for the manuscript that became Song of the Trees (Dial, 1975), her first book. It introduced the Logan family and was followed by Roll of Thunder, Hear My Cry (1976), which won the Newbery Medal.

Forty years later, in partnership with We Need Diverse Books™, Penguin Young Readers celebrates this momentous publication by launching a debut children’s fiction contest to find talented, ethnically diverse authors writing for readers ages 8-14. The submission period will begin in April 2016 with additional details to be posted on www.rollofthunderbook.com.

Ms. Taylor commented, “Without the Council on Interracial Books contest, my books about the Logan family might not have been published. The contest gave many aspiring writers the opportunity to be heard. Now the Roll of Thunder Publishing Contest is renewing that opportunity for new minority writers. It is amazing to me!”

Dhonielle Clayton, COO of We Need Diverse Books™ , says “We Need Diverse Books™ is thrilled to partner with Penguin Young Readers to honor the 40th anniversary of Roll of Thunder, Hear My Cry. This award-winning book is pivotal, life-changing, and timeless for so many readers. As one of the first mirrors of Depression-era African American life for children, it brought so many forgotten readers onto the page, giving them cathartic access to a family’s triumph over the injustice of racism. Taylor gave the children’s book world a strong heroine whose perseverance sticks with readers long after her story is complete. As an African American child spending summers with my grandparents on their farm in Mississippi, I learned that my family had undergone many of the same challenges as the Logans, and this parallel made Roll of Thunder, Hear My Cry the first book where I could find a part of my history and culture contained within the most treasured of places – a book.”

Jen Loja, President of Penguin Young Readers, said, “We are tremendously excited to partner with We Need Diverse Books™, an organization committed to increasing diversity within the children’s book industry and raising awareness, just as the Council of Interracial Books intended when they launched the contest through which Ms. Taylor’s own writing was discovered. Roll of Thunder, Hear My Cry has been read by generations of young readers, and we look forward to launching a new voice to honor this tradition of diversity in American literature.”

ROLL OF THUNDER, HEAR MY CRY was first published in 1976. Set in Mississippi at the height of the Depression, this is the story of one family’s struggle to maintain their integrity, pride, and independence in the face of racism and social injustice. It is also the story of Cassie Logan, an independent girl who discovers over the course of an important year why having land of their own is so crucial to the Logan family, even as she learns to draw strength from her own sense of dignity and self-respect.

The book was followed by eight additional novels to form the Logan family saga. The 40th anniversary edition of Roll of Thunder, Hear My Cry was released with new jacket art by Kadir Nelson, an introduction by Jacqueline Woodson, and additional content from Ms. Taylor on January 5, 2016.The complete series – Let the Circle be Unbroken, The Road to Memphis, Mississippi Bridge, Song of the Trees, The Friendship, The Land, The Well, The Gold Cadillac – will be reissued in paperback with original art by Mr. Nelson for release in April – July 2016. The final book in the Logan family saga will be released by Viking in 2017.

Mildred D. Taylor is the author of nine books including The Road to Memphis, Let the Circle Be Unbroken, The Land, The Well and Roll of Thunder, Hear My Cry. Her books have won numerous awards, among them a Newbery Medal and Germany’s Buxtehude Bulle Award (both for Roll of Thunder, Hear My Cry), four Coretta Scott King Awards, and a Boston Globe—Horn Book Award. Her book The Land was awarded the L.A. Times Book Prize and the PEN Award for Children’s Literature. In 2003, Ms. Taylor was named the First Laureate of the NSK Neustadt Prize for Children’s Literature. In 2004, Mississippi celebrated a Mildred D. Taylor Day, and Mildred Taylor returned to her roots to address several hundred school children and adults at The University of Mississippi.

Mildred Taylor was born in Jackson, Mississippi, and grew up in Toledo, Ohio. After graduating from the University of Toledo, she served in the Peace Corps in Ethiopia for two years and then spent the next year traveling throughout the United States, working and recruiting for the Peace Corps. At the University of Colorado’s School of Journalism, she helped created a Black Studies program and taught in the program for two years. Ms. Taylor has worked as a proofreader-editor and as program coordinator for an international house and a community free school. She now devotes her time to her family, writing, and what she terms “the family ranch” in the foothills of the Rocky Mountains.

We Need Diverse Books™ is a 501(c)(3) organization established in 2014 to address the lack of diverse representation in the children’s publishing industry. With the announcement in 2014 of an all-white, all-male panel at BookCon, a major publishing event, a group of children’s book authors responded with an aggressive social media campaign to draw attention to the need for books that authentically reflect the experience of all children. We Need Diverse Books™ is now a team of children’s book lovers that advocates essential changes in the publishing industry to produce and promote literature that reflects and honors the lives of all young people. Our mission is to put more books featuring diverse characters into the hands of all children. We Need Diverse Books™ has a national platform in the area of diversity in children’s literature, and funds six distinct programs and awards that seek to: