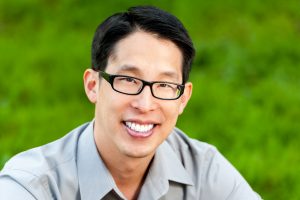 Yang Champions Diversity in All Forms and Reading for Non-Readers with his Platform, “Reading Without Walls”

New York, NY, January 4, 2016—The Children’s Book Council (CBC), Every Child a Reader (ECAR), and the Center for the Book in the Library of Congress (CFB) have announced the appointment of Gene Luen Yang, Printz Award winner and two-time National Book Award finalist, as National Ambassador for Young People’s Literature. The program was established by the three organizations in 2008 to highlight the importance of young people’s literature as it relates to lifelong literacy, education, and the development and betterment of the lives of young people. Yang will travel nationwide over the course of his two-year term promoting his platform, “Reading Without Walls,” showing kids and teens that reading is a vital part of their lives, and speaking to parents, teachers, librarians—everyone invested in young people’s literacy—about how better to connect with kids and teens and help them love reading. Yang succeeds beloved and esteemed authors Jon Scieszka (2008–2009), Katherine Paterson (2010–2011), Walter Dean Myers (2012–2013), and Kate DiCamillo (2014–2015) in the position. Gene Luen Yang is the first-ever graphic novelist to be named National Ambassador for Young People’s Literature.

The inauguration ceremony, presided by acting Librarian of Congress David S. Mao and featuring both Yang and DiCamillo, will take place on Thursday, January 7 at 11 a.m. in room LJ-119 of the Library of Congress Thomas Jefferson Building, 10 First St. S.E., Washington D.C. The event is open to the public; no tickets are required.

“I’m thrilled and humbled to be appointed National Ambassador for Young People’s Literature. Reading breaks down the walls that divide us. By reading, we get to know people outside of our own communities. We gain knowledge others don’t expect us to have. We discover new and surprising passions. Reading is critical to our growth, both as individuals and as a society. The Children’s Book Council, Every Child a Reader, and Library of Congress all empower people by getting them to read. I’m honored to take up that mission myself and to carry on the amazing work of the ambassadors before me,” said Gene Luen Yang.

“Gene Yang is a talented writer. He is a brilliant artist. His stories are thought-provoking, genre-bending, utterly original examinations of the human heart. In short, Gene Yang is a Renaissance man. I am so honored to pass the torch of this sacred task to Gene. No one is better suited for bringing us all together,” said Kate DiCamillo, two-time Newbery Award winner and National Ambassador for Young People’s Literature Emeritus.

“What an inspired choice the selection committee has made in Gene. He is a brilliant storyteller who makes meaningful and profound connections with readers of all ages. And he has been a de facto ambassador for reading, inclusion, and graphic novels for years. I can’t think of anyone better than Gene to break down the walls stopping people from becoming lifelong lovers of reading,” said Jon Yaged, President & Publisher of Macmillan Children’s Publishing Group.

Jon Colman, Executive Director of the CBC added, “We couldn’t be more pleased with the selection of Gene Luen Yang as the next ambassador. He embodies everything that we look for in this position and we can’t think of a more fitting person to be representing young people’s literature over the next two years.”

“We are thrilled that Gene Luen Yang has agreed to be the new National Ambassador for Young People’s Literature,” said John Y. Cole, director of the Center for the Book, which administers the ambassador program with the Children’s Book Council. “Gene’s message of inclusion and acceptance of all people is especially relevant today. The Library of Congress looks forward to the next two years of Gene’s promotion of reading and literacy among young people.”

The National Ambassador is selected for: his or her contributions to young people’s literature, the ability to relate to kids and teens, and a dedication to fostering children’s literacy as a whole. The selection is based on recommendations from a CBC-ECAR-CFB-appointed committee comprising educators, librarians, booksellers, and children’s literature experts.

The members of the selection committee for the 2016–2017 ambassadorship were:

For more information about the National Ambassador for Young People’s Literature, visit read.gov/cfb/ambassador/.

About Gene Luen Yang
Gene Luen Yang began drawing comic books in the fifth grade; he began making comics professionally over fifteen years ago. In 2006, his graphic novel American Born Chinese (Macmillan Children’s Publishing Group/First Second Books) became the first graphic novel to be a finalist for a National Book Award and the first to win the American Library Association’s Printz Award. It also won an Eisner Award for Best Graphic Album. In 2013, Boxers & Saints (Macmillan Children’s Publishing Group/First Second Books), his two-volume graphic novel about the Boxer Rebellion, was a National Book Award finalist and won the L.A. Times Book Prize. Gene has also won an Eisner for The Eternal Smile, a collaboration with Derek Kirk Kim. He is the author of the Secret Coders series (with artist Mike Holmes) and has written for the hit comics Avatar: The Last Airbender and Superman. Yang lives in the San Francisco Bay area. Learn more at geneyang.com.

About the Children’s Book Council (CBC)
The Children’s Book Council, established in 1945, is the nonprofit trade association of children’s book publishers in North America, dedicated to supporting the industry and promoting children’s books and reading. The CBC offers children’s publishers the opportunity to work together on issues of importance to the industry at large, including educational programming, literacy advocacy, and collaborations with other national organizations. Please visit cbcbooks.org for more information.

About Every Child a Reader (ECAR)
Every Child a Reader is a 501(c)(3) nonprofit dedicated to instilling a lifelong love of reading in children. ECAR administers programs including Children’s Book Week, the annual celebration of books and reading, and the longest-running national literacy initiative in the country; the Children’s Choice Book Awards, the only national book awards program where the winning titles are selected by kids and teens of all ages; and the National Ambassador for Young People’s Literature Program. Please visit cbcbooks.org/about/every-child-a-reader/ for more information.

About the Library of Congress and the Center for the Book (CFB)
Since its creation by Congress in 1977 to “stimulate public interest in books and reading,” the Center for the Book in the Library of Congress has become a major national force for reading and literacy promotion. A public-private partnership, it sponsors educational programs that reach readers of all ages, nationally and internationally. The Center provides leadership for affiliated state centers for the book (including the District of Columbia and the U.S. Virgin Islands) and nonprofit reading promotion partners and plays a key role in the Library’s annual National Book Festival. It also oversees the Library’s Read.gov website and administers the Library’s Young Readers Center and its Poetry and Literature Center. Visit Read.gov/cfb to learn more.