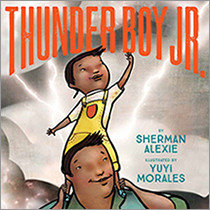 According to a recent survey by the Cooperative Children’s Book Center, only 38 out of 5,000 children’s titles published between 2002 and 2015 featured American Indian characters, and a mere 20 books were written or illustrated by American Indians.

We need to encourage more American Indians to write and illustrate, and help support them in this. There are so many wonderful authors now, but there’s room to grow…American Indian children, whatever tribe they’re in, whatever nation, they need to see themselves. [And] I believe all American children need to see different types of people. (Publishers Weekly)