Humanity and Harmony at YALLFEST 2015 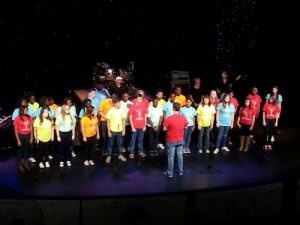 A brief note of thanks

I’ve had the privilege to serve on the CBC Diversity Committee for three years, and this blog post marks the end of my tenure. I want to express my gratitude to all members past and present for the opportunity to work with you, particularly the staff at the CBC. Owing in large part to your tireless efforts (and gigantic brains), the industry has made tremendous strides in publishing children’s books that reflect points of view, identities, backgrounds, and cultures in ways that would have been unthinkable even ten years ago. But our work as publishing professionals is just getting started. Your ongoing commitment reminds us all how far we have to go.

I originally intended to write something different, so I offer my apologies.

As a lucky attendee of YALLFEST 2015 I had a vague notion to write about the state of diversity among the authors, the panel topics, and the featured books at the festival. This is best left to its organizers, friends to whom I owe a debt of gratitude for being invited to participate. Upon arrival in Charleston, I learned about the horror and tragedy in Paris. It reinforced a collective obligation we had at YALLFEST this year: to honor Cynthia Hurd, a friend of the festival and a victim of the massacre at the local Emanuel African Methodist Episcopal Church.

Charleston is a gorgeous city. It is also remarkable for its public commemoration of slave owners, for whom monuments were built, streets named, and respected civic organizations formed.

On Saturday my friend and fellow author, Andisheh Nouraee, picnicked in Marion Park with his family. We marveled at the statute of John C. Calhoun. No doubt Calhoun had good qualities. He was also arguably the most effective advocate for slavery in early 19th-century America. In Charleston, by design, he has been immortalized as a symbolic hero; I stayed at the Calhoun Street Marriott. Soon we were wondering: What would it be like for either of us to stay, say, at the Goering Street Marriott, across the street from a statue of Hermann Goering? “But he had good qualities; he won the Blue Max.” Would it be all that different from the environment in which Cynthia Hurd, a black librarian, lived and worked and served her community? She, too, had an irreverent sense of humor—funnier and more appropriate than ours, from what I’ve learned—in spite of a life spent among monuments to human beings who denied her essential humanity.

But complaints about Charleston’s history dishonor Cynthia Hurd. Without exception the locals I met treated one another with a unique ease and grace—with a kind of distinctive, collective goodwill that to an outsider like me feels specifically theirs. Nowhere was this better represented than in the members of the West Ashleigh High School Choir. Here were 40 teens of different backgrounds and ethnicities, united by their talent and love of music, harmonizing together in memory of Cynthia Hurd.

This is the soul of Charleston, not its statues or street names. These are the voices and faces of diversity. Remember them during your next acquisitions meeting, marketing campaign, or publicity program. We owe it to them to follow their example and to provide them with the literature they deserve.