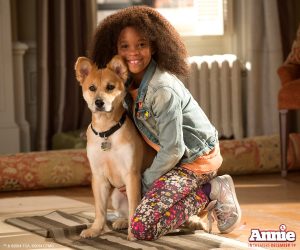 World rights were jointly acquired by Christian Trimmer, Executive Editor of Simon & Schuster Books for Young Readers, and Dawn Davis, Vice President and Publisher of 37 INK, a division of Atria, from Esther Newberg of International Creative Management. The yet-to-be-titled chapter book series launches in January 2017, followed by the second chapter book and the picture book in Fall 2017. The third chapter book is scheduled for Summer 2018. Illustrators for the series and the picture book are yet to be selected.

Quvenzhané Wallis, age twelve, is an actress known for her Academy Award–nominated role in the 2012 film Beasts of the Southern Wild, 12 Years a Slave (2013), and last year’s holiday blockbuster, Annie (2014), which garnered the actress a Golden Globe nomination.

“Reading is very important,” notes Quvenzhané Wallis. “It allows people to form a visual experience in their minds of what is going on in the story. I hope all readers enjoy using their imaginations along with me and take a journey into my books.”

Loosely based on the author’s own experiences, Miss Wallis’s yet-to-be-titled picture book follows a spunky young heroine who is very much looking forward to a night out with her mom at an awards show. The duo has a grand time getting dressed up, riding in a limo, and walking the red carpet.

A precocious and talented third grader is the star of Miss Wallis’s chapter book series. The books follow Shai Williams, a star in the making, who has a flair for the dramatic . . . both onstage and off. Perfect for readers ages six and up, the series is sure to appeal to fans of Clementine and Judy Moody.

“I’m thrilled that Quvenzhané is turning her estimable abilities to books,” says Christian Trimmer. “Her dedication to great storytelling is readily apparent. Readers of all ages are in for a big treat.”

“The characters Quvenzhané has portrayed have an alluring mix of self-possession and vulnerability,” adds Dawn Davis. “We look forward to her bringing that same electric combination to the page. We also hope these books will help expand the diverse array of voices in the children’s book space.”

Quvenzhané Wallis is an Academy Award– and Golden Globe–nominated actress whose talents and command of the screen go beyond her young age. Originally from Louisiana, Quvenzhané got her big break at the age of five when she was cast in the lead role in Beasts of the Southern Wild. Quvenzhané’s work in Beasts was hailed by critics as a career-defining performance and one of the best by a young actor in history and led to an Academy Award nomination for Best Actress, making Quvenzhané the youngest actress ever to receive that honor. In 2013, she worked alongside Chiwetel Ejiofor, Lupita Nyong’o, and Michael Fassbender in Steve McQueen’s 12 Years a Slave, winner of three Academy Awards. Quvenzhané further propelled her status as an acclaimed lead actress in her Golden Globe–nominated role as the titular character in the feature film Annie(2014), a modern retelling of the Broadway classic that has delighted audiences for generations, alongside Jamie Foxx and Cameron Diaz. Most recently, Quvenzhané starred in the animated movie adaptation of Khalil Gibran’s iconic worldwide bestselling book The Prophet, which was produced by and starred Salma Hayek, along with Liam Neeson, Jon Krasinski, and Alfred Molina. She is next set to star alongside Russell Crowe and Amanda Seyfried in the Gabriele Muccino–directed Fathers and Daughters. Recently announced, Quvenzhané also is attached to the film adaptation of the New York Times bestselling book, Counting by 7s, by Holly Goldberg Sloan. In that film, she will portray main character Willow Chance.